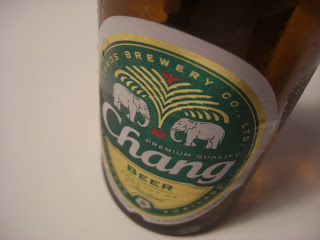 One of the perks of writing this blog is receiving free stuff. It doesn’t happen often but I gratefully accept when the offer is there. This doesn’t mean that I will eulogise about it or feel obliged to say good stuff about it; it’s just good to get it and if I like it then I’ll write positively about it. So a few weeks ago when I received an email asking if I’d like some Chang I said yes, of course, send it on over. Fine, I thought when it arrived, and then, I know, it’s a Thai beer and this blog purports to be about the antics of my pencil and my spoon (a spoon that’s been hidden away for a while, I know), so I thought I’d get the old silver stirring weapon out and into action again.

Pad Thai is a favourite dish of mine. It’s everything that I want in a dinner: fresh and zingy and light yet filling and hearty and rich; it’s great fun to eat and easy to cook; it’s got the full spectrum of tastes and a different texture with each chew. So I thought, let’s put Chang up against it to see how well it does. And I’m being totally honest here when I say this but Chang is absolutely the perfect beer to go with Pad Thai, which is a shame because I expected and actually wanted to be able to write something bad like, Chang sucks with Pad Thai! but I just can't. 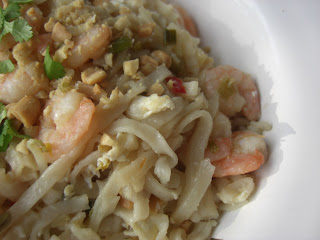 Chang is 5%, a pale gold and has those big lager bubbles that simultaneously manage to look good and evil as they stream up the glass. The nose is delicately sweet like fruit pastels with hints of apple, sherbet and the lagery spritz of citrus. The freshness doesn’t last long on its own and having a bottle by itself is nothing to holler about, but with Pad Thai it’s awesome: the fruitiness clings around long enough to lift the nutty-oily-umami richness, the fizz cleans the palate and gets you ready for the next mouthful and there is just enough going on to balance the chili heat and round everything off with gentle applause. Nothing overpowers anything else, there is no struggle, and, most importantly, the dinner is better with the beer than without. That’s what good pairing is. It’s not about having haute cuisine with designer craft beer. It’s not about choosing the flashiest name or the specialty dish, because, let’s be honest, when we drink beer at home it’s usually not with fancy restaurant-style food, it’s with the dinners that we know and love and we want a simple beer pairing that works wonders. Life is about the simple things done well (breathing, consuming, reproducing, and so on). I’ve said it before but it’s about adding one and one together and getting three. Pad Thai plus Chang equals three.

I wasn’t expecting such a good pairing, I’ll be honest, but it truly worked well. But here’s the important question: will I buy a six pack for myself? Truthfully I don’t know, but I’m certainly happy to recommend it to everyone as one of those beers that it good with Thai food. If you buy it to drink on its own then you might be left wanting but serving it with curries, salad or noodles is a winner. And you know, there’s something to this food and beer pairing lark when you can take a national beer and pair it with a national dish; there’s a symmetry that should be there, a natural you-and-you belong together kind of thing. I like that.

You can buy Chang in six packs in Oddbins for £5.99. And if you want Pad Thai recipes then look here and here (I would write-up my own but it’s so easy that it seems unnecessary so I’ll leave that to those who know better than I do).
Posted by Mark Dredge