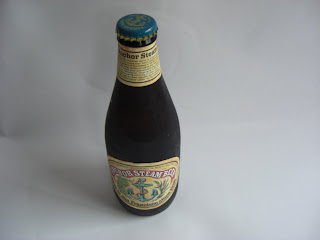 I say Game 5, but it is really only the part of Game 5 which happened before the rain finally made play impossible. Don’t you just hate rain? I can’t think of a single time when I’ve been happy to see it. Never mind, the suspension does bring some good news: ‘extra’ baseball and therefore extra beer. But I might need to pop back to the shops if it goes to Game 7.

Now here’s a special beer from one of the pioneer craft breweries in the United States. In fact it’s probably the pioneer: a glorious trailblazer. Based in San Francisco, Anchor Steam is their trademark brew; it’s what they’re famous for. The bottles are sexy; a mix of old and new with a squat shape, perfectly formed for the hand, the label is immediately eye-catching with the Anchor prominent in the middle, and a neck brace of information to read between gulps. Their range is small compared to other breweries, but this is no bad thing, and they stick to tradition rather than innovation: their Porter is packed with chocolate, bitter roast grain and berries; the Liberty Ale is intoxicating with loads of malt and a smack of grapefruit and lychees; while the Old Foghorn is a big barley wine.
The Anchor Steam is an amber colour with a creamy yellow head. A big, clean aroma of bread, caramel and toasted grain wafts out. There is more of the bread and caramel in the mouth with plenty of malt depth and a peppery, citrus hop finish. There is almost something savoury about this beer with the perfect balance. It is rich and full of flavour; a classic and deservedly so.
Posted by Mark Dredge