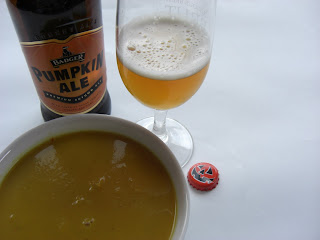 This week, while I was drinking a new bottle of beer, I read the bottle and saw, to my delight, a recipe printed on the label. The beer was Pumpkin Ale, brewed by Badger, and the recipe is for a Pumpkin Ale Soup.

First the beer. It’s a gorgeous autumn beer; flame coloured, smoky and spicy. It’s warming like a bonfire with a rich aroma which almost becomes whiskey-like, there’s some earthy spice, a roasted-fruit sweetness and there’s a hint of a wheat beer about it. The mouthfeel is creamy and smooth and the taste is biscuity to begin then the earthy hops come trick or treatin’ with a vegetal sweetness. It’s a really good specialty seasonal.

So with the beer drunk in the week, I made the soup today. Now I love butternut squash soup (check out a brilliant recipe here) and pumpkin ain’t all that different. The beer bottle recipe is simple and precise, all squeezed into a few lines of small text. All that was asked here was to boil pumpkin and potato, then add it to onions, chili, garlic and curry powder, then pour in some stock, a glug of the beer and simmer before blitzing and serving. Easy as pumpkin pie.

I pretty much followed the directions, except I cut out the middle man and cooked the pumpkin straight in the stock, and I didn’t add potato because I got a big pumpkin. The result, unfortunately, were slightly disappointing. There was a bitterness which didn’t quite work and the soup was a lacking a sweetness. Perhaps I added too much stock, or perhaps I over-seasoned it, I don’t know. It was perfectly edible, don’t get me wrong, just not delicious. I tried adding cinnamon and honey as pumpkin-friendly flavours, but they couldn’t pull it together. I think butternut squash would be a better choice of veg as it’d add a rich, velvety thickness to the soup. One positive was that the beer itself worked very well with the soup; the warming, creamy-smooth beer and the hot spiced soup sparked off against each other nicely. I’ll probably try it again; I liked the beer so much I bought some extra for the cupboard.

And top marks to Badger brewery for this; I think it’s the first time I’ve seen such a thing on a bottle of beer.
Posted by Mark Dredge