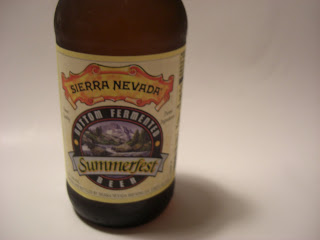 Last night’s game started well for me with a thick slice of fresh bread topped with an unreasonably large amount of peanut butter and strawberry jam. Man it was good, but I tell you this, the World Series is going to make me fat: during the hours when I ordinarily should be sleeping, I am actually up drinking beer and eating lots of food to keep me awake. But, hell, I’ve got five months to work it off so I’ll enjoy it while I can.

I have never had a bad Sierra Nevada beer. And I’ve had a lot of them. Their Pale Ale is seen as the beer which kick started the American craft brewing scene and it’s popping up in pubs and bars in England now: it is paving the way for the rest to follow. The dominant characteristic of Sierra Nevada brews seems to be the hops, which sing of citrus. Even the porter, stout and wheat beer, along with their big boy Big Foot, all feature that hop presence.

The Summerfest (following on the festival theme from last night’s Dogtoberfest) is a golden, gleaming, bottom fermented pale ale. Lager-lovers wouldn’t believe you if you told them this was actually an ale. The aroma is the familiar citrus hops plus something a little soapy (although this might be subliminal as the beer is very ‘clean’ tasting). The flavour begins with a simple, cereal malt before tangy grapefruit and lime arrives from the hops. I wanted to get more out of this – more malt depth - but it never came. It’s a simple, but very good, lager-like beer. A classic summertime brew.

I’ve got a day off tonight as the teams travel from Florida to Pennsylvania. This gives me a chance to 1) catch up on some sleep, and 2) to go shopping for some more American beers, I just hope I can find some.