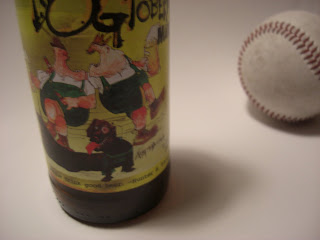 I love baseball almost as much as I love beer. Enjoying them together is a sure-fire winner. This week sees the final games of the year, a best-of-seven series between the Tampa Bay Rays and the Philadelphia Phillies to determine the World Series Champions.

Yesterday morning, less than 24 hours before the first pitch of the series was thrown, I had an idea. This idea of mine was to drink a different American beer during each game of the World Series. It’s not the most amazing of ideas, granted, but it works just fine for me.

I checked the beer reserves in the garage and under the stairs and, sure enough, I had some American beers. Of course I had some. I have a real thing for beer brewed across the pond right now, loving their brash over-the-top-ness, the way they’re rejuvenating old styles and adding their own yankee twist, the sheer variety of beer being made, and just how good much of it is. It’s frankly quite exciting (there are those ardent oldies who dismiss the Americans off-hand, but I greet their brews with open arms and an open mouth).

The only trouble I can foresee for this little mission of mine is that I only have four bottles of American brewed beer in the house, and one of these I only want to open if there is a seventh, and deciding, game (to say it’s a ‘special’ beer is to place too high a value on it; I just want to save it for an ‘occasion’). There will come a scramble to find more beers over the weekend (if only this idea would have come to me a few weeks ago, I’d be fully prepared with a fridge well-stocked with state-side treats. Nevermind.).

I had to start with this beer, it seemed fitting that the final acts of the ‘Hunt for October’ were watched with a special Oktoberfest beer in hand. Dogtoberfest won a Gold medal for best German-Style Märzen at the Great American Beer Festival just a few days ago, so I was expecting something pretty-damn good.

It pours a deep amber/flame colour with a whispy lace of foam. The nose is an ever-developing compendium of juicy fruits, berries and citrus, and a depth of roasted malt to begin, moving into sweeter candy and pastry-like malt. In the mouth there is burnt caramel to begin then this is swept away by the hops which grow and grow in stature, finishing well after the beer is swallowed. But unfortunately there is a watery-ness in the middle which makes it seem like it’s missing something important. If you’ll allow me a baseball metaphor, it’s like a ball which is hit deep for a home run: First there is the initial wallop of the bat against the ball, then the crowd freeze, not sure if it’s hit hard enough or not, then they slowly rise, getting louder and louder as the ball hits a fans glove for a home run, and the cheer continues until the batter has returned to his dugout.

It’s a pretty good beer. But not spectacular. However, it was much more enjoyable than the Backstreet Boys’ attempt at the national anthem.