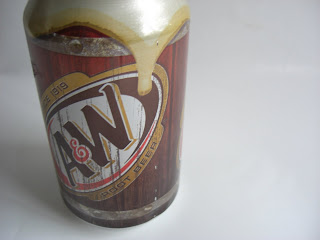 The clocks went back last night and I’m feeling a little jet-lagged, either that or it’s the knock-on-effects of a baseball game which finished at 6.45am (5.45 if you take into account the time change, but as I hadn’t slept it was 6.45 to me).

I knew there was a chance of rain in Philly, so when I woke up from a short pre-game performance-enhancing power-nap to see a mist of rain sweeping over Citizens Bank Park I wasn’t surprised. But I stuck with it for an hour and a half of game build-up, which frequently snapped back to shots of a sodden ballpark. Eventually, at 2.30am, I decided to brush my teeth and get ready for bed. As soon as I got back in front of the TV, guess what – the water-proof tarps had been removed and the players were out on the field! Game on!

I went shopping yesterday to look for more American beer so I can successfully complete this mission of mine (I managed to find enough bottles to get through) and while out I found some root beer, which I cracked open during the lengthy pre-game build-up. Root beer is one of those American things that I’ve heard so much about in popular culture, but have never actually tried for myself. But what is it?! It’s caffeine-free but heavy on the sugar and it’s made with high fructose corn syrup, fizzy water and some natural and artificial colours and flavours. That’s helpful.

It pours a deep red-brown but had no head; from cartoon images, I was expecting a frothy, creamy head to rise up out of the glass. The first thing that hits you is that it smells like antiseptic cream, not necessarily good for a drink as it just reminds you of falling over as a kid and the painful application of the healing cream. I didn’t really know what to expect from the taste, but it basically was like a glass of Dr. Pepper with a dash of coke and a slug of cough mixture poured in. Interesting. 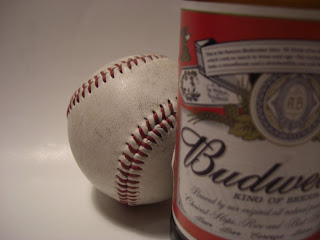 When the game finally began at 3am my time, I didn’t really feel like cracking open a beer, to be honest. Plus I’d just brushed my teeth and I had that minty tingle in my mouth. Luckily, though, earlier that day I had found a bottle of Bud sleeping in the back of the beer cupboard.

I took the crown of its shiny brown head and did something unique: I poured some of the beer into a glass. That’s right, I poured it out. This was for the sake of consistency, you see, because all the other beers I drink from a glass. It actually pours a very pale gold with a lime-cordial green hue. There was hardly any discernible aroma, apart from that of ‘beer’. The taste is clean and crisp (that must be the addition of rice?!), and I found it tasted surprisingly familiar despite rarely drinking it. I finished the few mouthfuls that I’d poured into the glass and drank the rest from the bottle, which was much more enjoyable. It’s hard to describe the flavours in a Bud; the malt is simple with a slight cereal hint, and the hops are so inoffensive that they barely register (even though they brew it using ten varieties of hops!). I did have a flash of excitement at one point when I thought I tasted a hint of apple. That was the highlight.

This bottle got me thinking. There’s so much good pale ale and lager being brewed in the USA right now (Samuel Adam’s Boston Lager. Sierra Nevada Pale Ale, to name just two), and craft sales are on the up, but Budweiser is still the market leader. So is the branding more important than the taste for Bud, where the name has become synonymous with American beer (despite its European descent)? I read that Bud holds a 50% US market share, which is incredible, but what does this mean for the craft brewing section? How can they compete? I guess the answer is that they don’t compete. There are so many incredible craft beers being brewed that they have to be considered apart from the ‘King of Beers’: You don’t compare McDonald’s with Joe’s Bar and Grill, even if Joe’s burger is the juiciest you’ve ever tasted and his bar-brewed beer is the finest that’s caressed your lips.