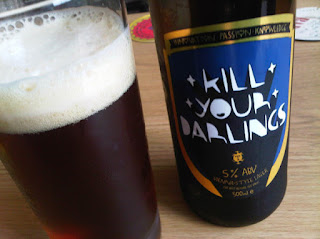 I’ve bought a lot of beer recently. A weekend in Prague, a couple of days at GBBF, a few deliveries and a peek at myBrewerytap’s website which left me unable to click away without getting my credit card out have seen the fridge over-flowing with bottles. This weekend I put a big dent in the stash.
Thornbridge’s Kill Your Darlings, a Vienna lager hopped with Tettnager and Amarillo, is a deep red brew which is all about the malt – coffee, toffee, toffee apples. The Amarillo gives a floral, fruity flavour which is nice twist on the style. It’s good and the flavour evokes an autumn that I hope is far away. I really like the label design for this one, done by Kid Acne. 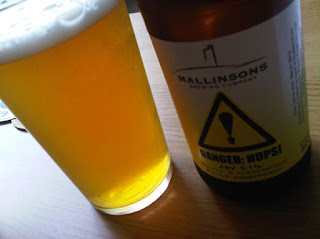 Mallinsons Brewery is one that everybody should be aware of in Britain. They make some fantastic beers and aren’t hop-shy, which I like. When I saw a beer called Danger: Hops! there was no way I wasn’t buying it. It’s 5.1% and the aroma is like every tropical fruit in the world stuffed into a beer glass, plus some peaches and grapefruit. It’s so smooth and gluggable and has a dry, peppery bitterness which hangs around. Bloody good beer.

More big hops followed with Odell’s Myrcenary DIPA. I love Odell’s IPA so this was irresistible. It’s a big beer (9.3%) and that starts in the aroma which tastes like you’ve faceplanted a bowl of mandarins, oranges and mango (that’s a good thing). It’s sweet and full-bodied which threatens to go sticky but is saved by a perfumy, clingy bitterness which leaves your tongue begging for more sweetness. It’s good but I’ll take the regular IPA any day. 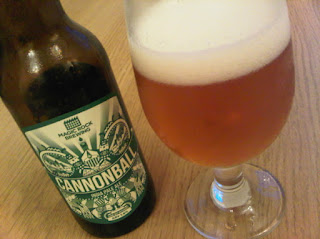 With those two hoptastic brews drunk I didn’t think things could get better... but they did. Magic Rock’s Cannonball (7.4%) is one of the best British beers I’ve had this year. So good it had me texting and emailing people immediately to tell them to order some. The aroma is great, peaches, mango, pineapple, the body is light but it carries the strength and the hops with ease and it’s not sticky sweet which some US equivalents are. The only thing I’d like is a little more bitterness but this was the first brew of it and it’s pretty damn awesome already. I want more. (This beer also left me playing the ‘cannonball’ scene from Anchorman over and over in my head).

Some darker beers too: Brains’ Original Stout. At 4.1% I feared it’d be thin and flabby (and I hate thin and flabby stouts) but it was very nice – coffee, chocolate, toasted nuts; a full body, dry and roasty, some berry fruitiness and an earthy, coffee bitterness. Good beer and it looks great too. 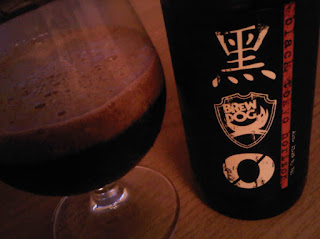 And finally the BrewDog, Mikkeller and Nogne O collaboration for Black Tokyo Horizon. A 17.2% black hole which sucks in light from all around. It smells great, like dark chocolate covered berries, marzipan and roasted nuts, but it’s very sweet and there’s a huge, dry and herby bitterness which makes it a bit disjointed. Maybe it’ll calm down given some time but it’s pretty wild right now. I prefer the three originals (especially the Islay-barrel-aged Black – that’s insane! BrewDog need to get some Tokyo* in Islay barrels).
That’s some of my recent drinking. Anyone had these? Anyone had anything really good recently?
Posted by Mark Dredge