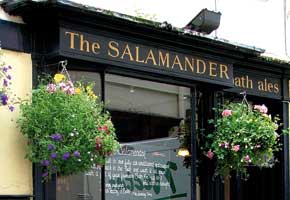 Whenever I go somewhere new and want a pint, the first thing I do is send a tweet and ask for suggestions of where to go and what to drink. No longer is the Good Beer Guide enough on its own, nor a simple search on Google; I want a personal recommendation from someone because I feel I can trust that better than any other resource – it’s word of mouth at its online fastest.
Yesterday I was in Bath for the day on a Twitter Trip with VisitBath, the tourist board. The idea was for a group of us, each focusing on something different, to go to Bath and explore via the suggestions we received from Twitter. So we ask a question like ‘where’s the best place to get a bacon sandwich?’ and we use the responses we get to make our decision. There were no other requirements, no rules; just follow the tweets and be a tourist in Bath. Being the beer blogger, I focused on pubs and local beer.
The Raven was suggested to me by lots of people. Just off the main shopping street, it’s long and thin, a bookcase lined with many well-read paperbacks catches my eye first, there’s little stools pushed around tables, a bar lined with cask taps, small blackboards listing the beers and a big blackboard chalked with pie names. I had a half of the house ale, Raven Gold, from Blindman’s Brewery, which was a good sighter for the day of drinking ahead. Later, looking unsuccessfully for cider, I returned for a half of the Raven dark, the other house beer, and sat quietly reading – it’s the perfect sort of pub for wasting away a few afternoon hours, though I imagine it fills up quickly from five o’clock (Travels with Beer, as ever, has great pictures of The Raven).
Seeing that I was only about 20 steps from the Salamander, the Bath Ales pub, my next choice was easy, especially as this had also be recommended many times. A shabby-smart pub serving the full Bath range, the Salamander is a must-visit pub in Bath, I think. The beers are good (I like the Bath Ales ales – well made and tasty), the food is perfect pub grub (great scotch eggs and triple cooked chips!) and there’s a friendly atmosphere.
The Old Green Tree is a pub I’ve been to before but it got lots of suggestions and I couldn’t resist. It’s a small two-room pub with a bar between serving around six real ales. It’s made cosy by the feeling that it hasn’t changed much in many years, the sort of place with old carpet and photos from the fifties. A RCH East Street Cream was a showcase of British malt while I listened to the soundtrack of the barmaid’s moany domestic woes punctuated by many ‘fuck’s spat with a West Country drawl.
In search of beer brewed in Bath (Bath Ales is just outside), I wanted some Abbey Ales. I tried the Star Inn but it’s one of those places on the edge of the city which closes for a few hours in the afternoon. Instead it was the Coeur du Lion, a tiny one-room pub down a busy street which feels like walking into someone's badly-dated living room. The bar has four real ales, with two from Abbey Ales. Bellringer, as recommended by Boak and Bailey, was a decent beer, as was Box Steam’s Piston Broke. The pub’s busy walls, good beers and slightly eccentric customers make for a good city centre pint stop (more images here from Travels with Beer).
Looking for cider I found the Garrick’s Head but opted for a ‘lager ale’ called Chesil from Dorset Brewing. The beer wasn’t great (fairly bland and in bad condition) but the pub was nice. That’s all I’ve got for the Garrick’s Head.
I also wandered around some museums and bookshops because it’s nice to be cultural occasionally. I saw the Postal Museum and the Museum of Bath at Work. Both were oddly interesting in their own ways and definitely unusual, which was the request I made. Bath has some beautiful book shops, notably Mr B’s Emporium, George Bayntun and Topping and Company.
The day was fascinating because I was at the whim of what people on Twitter suggested to me, unsure what I’d find when I arrived at my destination. Usually when I go to a new city I plan carefully and have maps printed with circles highlighting where each bar or brewery is, but this way allowed me to be more flexible and spontaneous in my search for good beer.
Untouched by the beer bars of Leeds or London, Bath is a great place for local beers in nice pubs where there’s a slow, ambling pace to the drinking. Don’t go looking for double IPAs and C-hopped saisons, but do go for a parochial pride at their products and do go for the pubs with lots of character, whether it’s the building itself or the people inside.
Do you let Twitter guide your drinking when somewhere new or do you prefer the Good Beer Guide or a Google search?
This trip was something I worked on as part of my day at a digital and social media agency. We worked with Visit Bath, the tourist board, to arrange the trip. When we were looking for bloggers and journalists to attend my boss suggested I did it. I wasn’t going to say no, was I? So while I may have had some input in the project, I took part on the day just like all the others – as a Twitter explorer. We also got filmed on TV doing it. Here I am with Tim Anderson, this year’s mighty Masterchef winner, in the Salamander. I got the train to and from Bath with Tim. He’s a great guy.
Posted by Mark Dredge