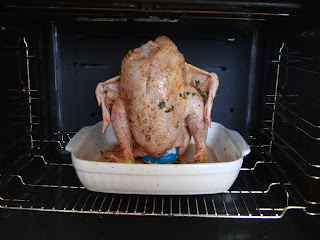 Chicken cooked with a can of beer up its bottom. Also known as beer butt chicken or, in this case, Punk Ass Chicken.
I think people cook Beer Can Chicken for one reason: it looks awesome. Seeing that bird perched on the can, legs and wings akimbo, almost human, as if you’ve stitched up your mate big time and tied him to a bin, naked, cannot fail to impress the inner school boy (just look at the image above!), while the machismo of grilling a bird whole appeals to the manly man’s manliness. Who doesn’t look at a Beer Can Chicken and think ‘I need to cook that’?
So Beer Can Chicken was a dish I needed to cook. It’s a BBQ dish but I don’t have a BBQ (third floor flat, no outside space; disposable BBQ in the park not up to the job) so I used the oven. I decided on Punk IPA because it gave me an excuse to buy a four-pack and because I could call it Punk Ass Chicken. It wasn’t a difficult decision. 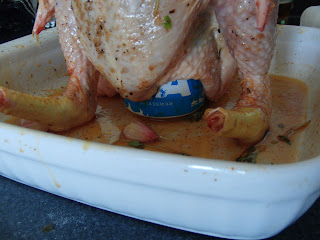 The first job is the best one: drink half a can of beer. You need the can open and half full. Then you need to get the chicken ready. I gave it a luxurious massage in oil, salt, pepper, paprika, fresh thyme, sugar, cloves of garlic and a little Punk before leaving it for an hour or so. When ready, heat the oven to 200C and empty it from all shelves except the lowest one.
Inserting the beer can is not the easiest job, especially with a heavy bird rubbed in slippery oil. Thankfully, like a nostril and a forefinger, a chicken’s back cavity appears to be the exact same size as a beer can, so once you’ve got hold of the bird it goes in with a satisfying push. At this point it looks a bit sorry for itself, all pink and cold with a can up its arse, but don’t feel remorse as it’s time to get it in the oven (do this very carefully – the bird is top heavy and mine fell after about 15 minutes in the oven and I need to go on an awkward recovery mission). 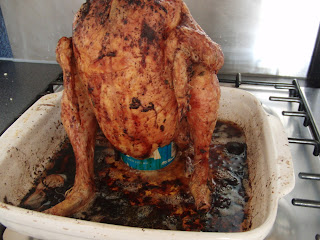 Around 90 minutes later (more for a bigger bird) and it’s done and looking resplendent and wonderful and crispy (I think there are few finer food sights than a roasted chicken). The only issue comes when trying to get the can out of the chicken at the end; the bird is heavy and hot and the can is filled with boiling beer. Place your hands on either side of the chicken and lift and wiggle until the can slides out.
To go with it I cooked a recipe which I’ve read many times but never dared cook: the brilliant Homebrew Chef’s roasted garlic IPA mash potato. Roast garlic until soft, heat milk or cream with butter, thyme and seasoning, make a paste with the roasted garlic cloves and add to the milk mix, add a little IPA (I used Punk) and then mix it all together with mashed potatoes. Creamy, garlicky, rich and then a little fruity from the IPA, the hop bitterness is covered by the butter while the roast garlic brings its own bitterness. It’s fantastic and a great side for the chicken. 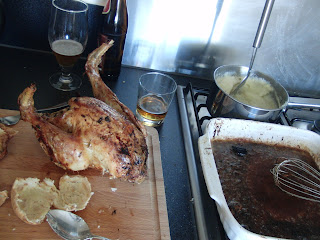 The question I was most interested in when cooking this was how much impact does the beer have on the taste? By using a strongly scented beer I hoped to get something fragrant in the meat which I could then adapt in the future by using different beers and birds. When hot I couldn’t taste the Punk (I got a little on the skin as it’d been marinated and basted in it) but when it cooled and I was picking my way through the rest of the carcass I could definitely taste a Punk-like fruitiness through it.
One of my favourite things in the whole world to eat is a just-roasted chicken with crispy, salty skin. Add a beer can into that and things get even better. Served with the IPA mash, some cooking juices and a Goose Island IPA on the side and it was a feast of wonderful hops. Beer Can Chicken (or Punk Ass Chicken) was a great success. If you’ve never made it then what are you waiting for?
Posted by Mark Dredge