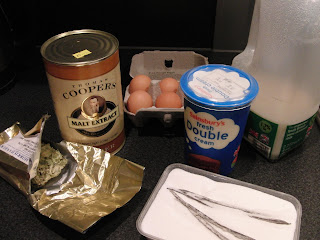 Beer ice cream is cool. The idea behind this deconstructed recipe comes from a fairytale mash-up of raspberry ripple ice cream and beer: it’s a malty wort-like ice cream with a fresh hop syrup ripple.
I’ve made a few beer ice creams and some have been good but some have been terrible. The thing to know is that sweetness is dulled by freezing but bitterness doesn’t seem to go with it, instead it remains and leaves a horrid clash of sensations with cold and creamy meeting bitter and dry, and nothing about that goes.
The first idea for this was to use the first runnings of wort from a brew of beer but the trouble with adding what is essentially just water into cream is that it doesn’t give the best texture (and ice cream needs to be thick and luscious not spiky with shards of ice). The next plan was to ‘brew’ some malted barley in cream and milk as part of the custard-making process but this was later abandoned through the unknowns of what would actually happen if I did this. The final choice, and the one I decided to go with, was using malt extract (a thick syrup of pure malt flavour used by homebrewers). For the ripple I wanted a streak of fruity sweetness with an underlying hop flavour but very little bitterness. I chose the hops with the lowest alpha acid content I could find (Hallertauer at 2.3% - the lower the alpha acid, the less bitter the hops are) because that was the best chance I had of avoiding a tangy oil slick ruining everything. Getting the ripple right required a few tests. Stewing the hops in hot water for just a few minutes made for a face-puckering bitter overload but leaving the hop flowers in cold water for an hour was much better, leaving the flavour with little of that ruinous bitterness. 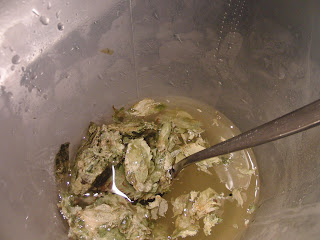 A classic custard is the base of the ice cream, it’s just sooped up with the addition of 150ml of malt extract (I used amber extract but I think pale would be better – amber was all the homebrew shop had. Also, taste it as you add it; 100ml might be enough for you). Knowing it had been given a dose of extra sweetness from the extract I took away 25% of the usual volume of sugar which is mixed with the eggs. Once made into a malt custard leave until completely cool. The ripple starts as a sugar syrup: 600ml of water and 100g of sugar reduced to around 200ml (though you likely won’t need all of this – you just need enough liquid to infuse the hops). Allow it to cool and then add 10-15g of dried hops for around an hour, or until you’ve got the flavour you want. Strain the liquid and set aside (here I also added the tiniest drop of green food colouring which was purely aesthetic but didn’t have the dramatic stand-out effect I hoped for!). Once the custard is cool pour it into an ice cream machine until ready. To get the ripple effect I poured part of the now-frozen ice cream into a container then drizzled over a layer or hop syrup, added more ice cream, then more hop syrup, then a final layer of ice cream and then whirled it all through with a spoon handle. 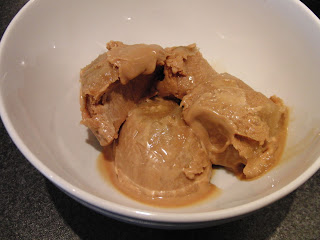 And how is it? Well it doesn’t taste exactly like beer... but it is good! And it’s the hop ripple through the middle which makes it, adding a little fruity cheekiness to the caramel-like malt ice cream. I didn’t know how it’d turn out but I’m impressed – next time I’d add a little less malt extract (or use a pale one) and maybe try and get little extra hop flavour in by either adding more hops or cold-stewing them for longer. Otherwise, a good first attempt, I think! It would also be great with toasted malt sprinkle.
Experimenting with the basic ingredients of beer is fun. I’ve tried smoking hops but what other recipes are there which use malt or hops? Perhaps a malt-crusted piece of fish with hop shoots and a hop sauce? Malt crème brulee with a hop/sugar topping? Roasted malt truffles with candied hop sprinkles? Any ideas?
I've just looked back over the ice cream recipes I've got on the blog and I found this one for Crunchy Nut Cornflake ice cream! That was great. I remember eating it at 3am in the morning while I stayed up late to watch baseball.
Posted by Mark Dredge