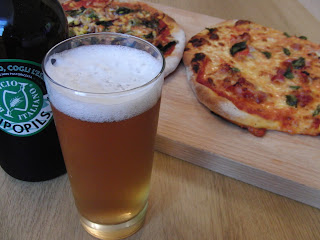 I have a theory: any beer works with any pizza...
Pizza is an inherently simple, eat-with-your-hands food. It’s the stuff of our childhood but we still eat it as a grownup, which has a cheeky appeal, like eating milky bars or fish fingers. Pizza can be one from a box (shop bought or take away-ordered) or it can be made from scratch, satisfyingly gooey in the middle and crispy at the edges, topped to your heart’s desire. On the grand scheme of food-things, making your own pizza is joyous and fun and bursting with childish appeal, like having free-reign to decorate a banana split with sauces, sweets and sprinkles. 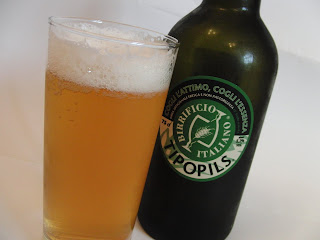 Tipopils is a lager from Birrificio Italiano and it’s one of the best lagers I’ve tasted. It’s made with four hop varieties (Hallertauer Magnum, Hallertauer Perle, Hallertauer Hersbrücker and Hallertauer Saaz), it’s a little sherberty to begin, a little herby and floral and a hint of fresh bread in the aroma, which mellows out to an inviting orange and pineapple fruitiness. It’s incredibly smooth drinking which creates a cuddle-effect before the bold hops stamp through and leave their lingering trail of dry bitterness. It’s got so much character to keep it interesting throughout the glass, making you want to drink more and more after each quenching mouthful. Remarkably good, enough to make me look for flights to Milan leaving in the next 24 hours.
The pizza was homemade, both the dough and the sauce (the most flour-dusted and sauce-splattered pages of any cookery book I have are the ones in Jamie Oliver’s Jamie at Home for pizza dough and tomato sauce). There were four of them; Lauren and I both topped two each – mine were dramatically better, of course (she used mostly sweetcorn and onion which, in isolation, suck as pizza toppings). One of mine was smoked pancetta, chilli and lots of mozzarella, the other was piled high with flat mushrooms, red onion, basil and mozzarella (although, as Reluctant Scooper says, the toppings aren’t relevant, it's pizza and beer and that's what matters). Both of the pizzas are umami-bombs calling for the fruity sweetness and fizz which Tipopils deals up, while the dry finish at the end cuts the richness of the cheese and tomato. The match is helped along even further by the Italian heritage of the headliners. 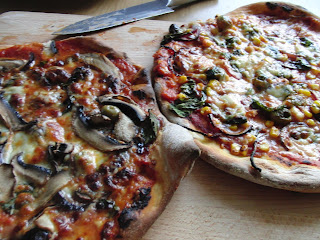 This was one of those dinners where every mouthful is a pleasure and you eat and drink until you are a food-comatose lump on the floor, covered in crust crumbs and spatters of tomato sauce, but still somehow sipping at the beer because it’s so good, eyeing the slices which remain.
Pizza and beer belong together, a glass in one hand and a slice in the other. Like meat and potatoes they work, whatever the infinite varieties of recipes permit. It’s the simplest of pairings and always works, whether it’s a can of cooking lager or a bottle of something special. Pizza and beer: what do you think? Is there any beer which wouldn’t work with pizza (I won’t believe it if there are!)? Are there any which work particularly well with certain pizzas?
I’m now going to eat the cold leftovers and I’m dribbling at the prospect.
Posted by Mark Dredge