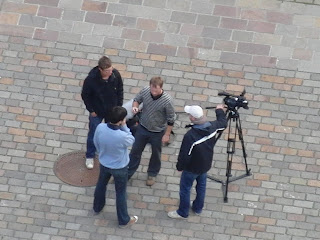 While we were in Pilsen it seemed like a camera crew were following our every move. At one point I got a bit freaked out (I was tired and drunk at the time, no doubt) and thought that we were actually trapped in some kind of Chuck Palahnuik story and were the unwitting stars of some horrible live action drama… thankfully it all ended well and they turned out to be very nice chaps who were making a film about beer in Pilsen for Czech Tourism. They were filming with the wonderful Evan Rail showing the sights of Pilsen and PilsnerFest, plus a few bars and some of the underground tunnels (where you can see us in hair nets and hard hats). This film does a pretty good job of showing the two days we had there, which were great fun (UPDATE: I've changed the video below so that it now includes my introduction - we were all asked to do a short intro and they've sent us our own videos. The rest of the video is exactly the same).
Pilsen is a cool place. I recommend it to anyone who goes to the , even if they only go there for one day (it's a one hour, £3 trip from Prague). Pilsner Urquell is a great place to look around while there are a few really good bars nearby for good beers, particularly Pivovar Groll and Small Breweries Klub.
Here’s the video (it's widescreen so cuts off in the blog; to see the whole lot follow the link to YouTube). See if you can spot me, Tim, Adrian and Pete throughout...