The World Cup of Crisps 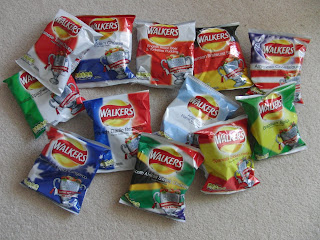 There are 15 flavours but three of them I haven’t seen: Scottish Haggis, Welsh Rarebit and Irish Stew. As those nations/teams aren’t actually in the World Cup, it probably doesn’t matter too much, but it did leave the problem of having 12 flavours to format into a competition. To combat this I started with a group stage (three flavours in each group, one goes out, the other two are placed first and second) then to a usual quarter/semi/final (the winner group 1 plays runner-up group 2, winner group 2 plays runner-up group 1...). I picked the groups blind and randomly. 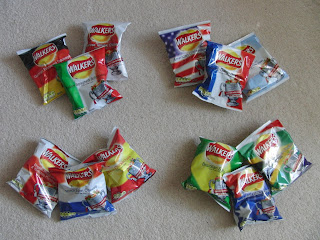 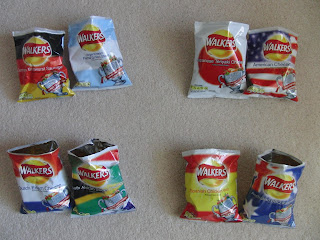 Quarter Final 1: German Bratwurst vs Argentinean Flame Grilled Steak
Close game, tough battle but ultimately the bigger power of the Germans beats the slow-build quality of the fiery Argentineans.
Quarter Final 2: Japanese Teriyaki vs American Cheeseburger
Another tough battle and the Japanese were strong but the American just tastes too much like an actual Cheeseburger to drop out; America go through.
Quarter Final 3: Dutch Edam Cheese vs South African Sweet Chutney
The Dutch stand out like their orange shirted equivalents, beating the spicy South Africans.
Quarter Final 4: Spanish Chicken Paella vs Australian BBQ Kangaroo
Actual classy paella flavour versus the burnt meat brashness of the Aussies; Spain go through. 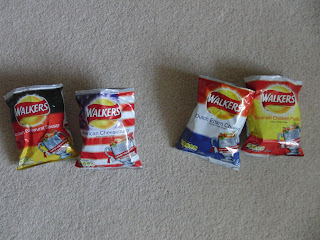 Semi Final 1: German Bratwurst vs American Cheeseburger
Sausage plays burger in one of the ultimate food battles. The presence of mustard and gherkins in the burger sees them comfortably into the final.
Semi Final 2: Dutch Edam Cheese vs Spanish Chicken Paella
Long, hard-fought battle; Spain authentic and excellent from the beginning but the Dutch grow stronger as they progress. We had a penalty shoot-out (meaning Lauren stepped in to try them and choose the winner) and Spain make the final. 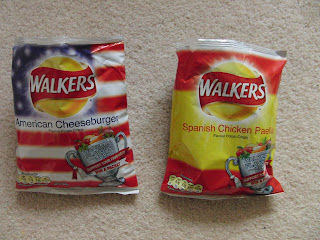 Final:  American Cheeseburger vs Spanish Chicken Paella
The big one and the two flavours which tasted the most authentic got to play each other. The fun, enjoyable quality of the burger powers past the paella and they are my Flavour Champion. 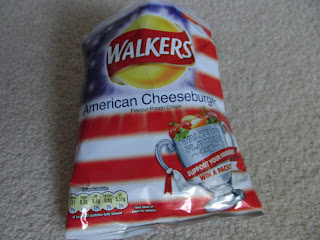 So American Cheeseburger wins for me purely because it tastes so much like a burger and I have a lot of respect for anyone who can make something else taste like a cheeseburger. Some of the packets were surprisingly good and some were just a bit rubbish, but the overall competition is good fun and it’s made my crisp eating a little more interesting. Now I guess I just need to find a relevant beer for each pack of crisps...
If you've had any of these then what do you think of the flavours? What’s your Flavour Champion?
Posted by Mark Dredge