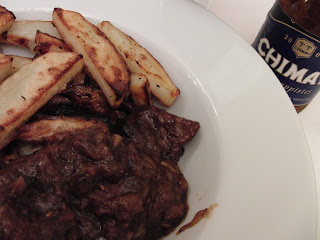 Ireland has beef and Guinness, England has steak and ale, Belgium has carbonnade. It’s that classic recipe which uses beer as the vital ingredient along with hunks of beef and lots of onions. I don’t know if there is a definitive beer to make carbonnade but a dubbel seems to be a popular choice, although I’ve seen everything from a bottle of geueze, to Orval, to a Flemish Red, to Westlveteren 12 and beyond into beers of all styles from all over the world. To be honest you can use any beer you want and each will add its own flavour, though it probably should be Belgian to qualify as Carbonnade (use a British ale and you’ve made a stew...). I decided to use Chimay Blue because it’s a great beer, it’s ideal for this recipe and I can buy it from Waitrose down the road.
The joy of carbonnade is the simplicity. Brown some beef, take it out, soften lots of onions, a little garlic and thyme, a couple of bay leaves, a teaspoon vinegar and of sugar, a little stock and then the beer and cook for a couple of hours on a low temperature until it’s thick and rich and delicious. Pile this high next to a mound of chips and a glass of beer. You can add mustard-covered slices of bread on top too. It’s great and hearty food, it’s warming, it’s tender, it’s intensely savoury with an underlying sweetness and it comes with chips: it’s proper man grub.
The Chimay adds a depth of flavour to it that can only be given by the beer and when you drink the beer alongside it you can pull out the caramel base, the dried fruit and the distant spice. Together they work perfectly; the beer is both dark enough to handle the carbonnade and light enough to not make it cloying, the carbonation is refreshing but it’s the bridge of flavours between the glass and plate that pulls it all together and makes it extra special.
Carbonnade is a great beer dish. It's so easy to make and whatever beer you open to put in will change the final flavour. My next attempt will use a geueze or Orval, I think, if I can bare to open one and not drink it straight down. Anyone used these or other beers to cook carbonnade? What has given the best results?
Posted by Mark Dredge