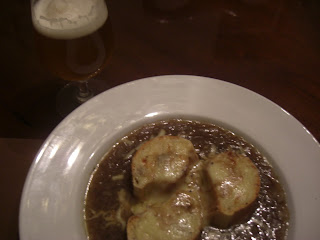 I think only soup can match the variety of flavour and texture that beer has in its spectrum. Beer can be pale gold or darkest black, it can be thick or thin, fragrant and zingy or rich and intense, light or heavy, smooth or textured, sweet or sour. Soup can do all of that too.
When it comes to matching beer and soup I falter. It’s a texture and temperature thing. A mouthful of warm, thick soup followed by a mouthful of cold, fizzing beer. I imagine the liquid vs. liquid battle to be like oil and water and that’s not something I want in my mouth. It shouldn’t work... But it really can.
With soup, beer works as an enhancement of flavour, as some balance, or as a bridge, as well as a palate cleanser and I’ve had some great recent matches:
French Onion Soup with Lost Abbey Inferno. Rich, sweet and beefy soup with a cheese-topped crouton and a sprightly Belgian-style blonde. The simplicity of the beer works well with the onion, the spice mirrors the pepper, the sweetness balances the savoury. A surprisingly successful pair. 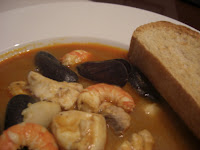 Bouillabaisse and Orval. Delicious, homemade fish soup, swimming with prawns, fat white flakes of cod, juicy mussels and a garlic crouton on the side. It’s a perfect soup for beer and the lemony lift of Orval cuts the fish richness while the near-savoury peppery hop character is a great tongue tickler.
Clam chowder with chilli and Meantime Pilsner. I can’t take credit for this match but I did enjoy it. We had this at the British Guild of Beer Writers awards and it was very good – rich, saline chowder livened with a spike of chilli and lifted effortlessly by the gentle, floral carbonation in the beer; a great match which was the inspiration behind this post and other recent experiments.
Spicy butternut squash soup and Meantime IPA. I love this soup. Velvety, heart-filling, spiced but not enough to blow steam out of your ears. With the big citrus-pith, earthy, spicy beer it’s great; they hit the same notes and one finishes then the other carries on seamlessly. 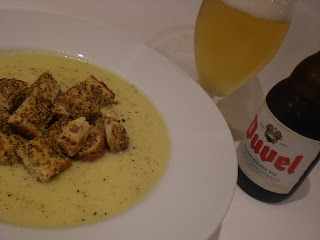 Leek, potato and cauliflower soup and mustard croutons with Duvel. Let me be controversial: I don’t like Duvel. I don’t get the hype that it has. I bought it again to try with this soup and I nearly got to like it, with the caramel, apples and honeysuckle flavour, but the dry finish is just astringent and a little unpleasant on its own. Luckily, it works a treat with food and this was a good match, picking up on the earthy flavours and giving enough sweetness and lift to balance things out. This soup is also fantastic with added curry seasoning and works equally well with the beer.
These matches have gone some way to changing my mind on the possibilities of beer working with soup. The texture/temperature clash is still a worry but when you get it right it really can be wonderful.
I have another issue when it comes to soup... I can’t say the word without breaking into the Mighty Boosh’s soup song. “Soup, soup, a tasty soup, soup, a spicy carrot and coriander..., chilli chowder...” It’s a mild affliction.
Posted by Mark Dredge