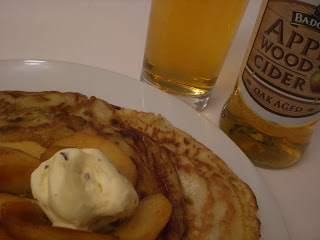 20.08: I believe in the new media circles this is what is known as a mash-up: it’s an As-Live Tasting meets a FABPOW.
20.10: It’s Pancake Day tomorrow and not doing something would be simply unthinkable, so this is it. Pancakes mixed, fried and flipped; apples sliced and fried in cider; ice cream dolloped on top; cider poured into my glass; ready to go.
20.12: First of all you are all probably thinking the same thing: why the hell is he drinking cider? Especially during a Food and Beer Pairing of the Week? Well, if cider is good enough for CAMRA then it’s good enough for me. Plus, this particular cider is made by Thatchers for Badger’s, the brewery, so that’s doubly okay.
20.15: I made the pancakes mix with the cider in the batter (70% milk, 30% cider, or something like that) and then I fried the apples in butter, vanilla sugar and cider, until soft and sweet and sticky. If I do say so myself it's damn good. The pancakes are thin and crispy on the edges and light and floppy in the middle. Perfect. The apples make a great topping too (although, to be honest, can you really beat sugar and lemon?!).
20.18: Writing is distracting me from eating. I can see why I’ve never done an As-Live FABPOW before, logistically it’s awkward.
20.21: On to the cider. It’s Apple Wood Cider, 6%, oak aged and medium dry (so the bottle says). It pours an electrifying orange colour with those fast-paced bubbles that hurry to the top. It’s not one of those Grandpa's Ballbag Scrumpys that smells like horse shit and comes with a few stray pieces of straw in the pint glass, this is one of those apple-core and apple-skin ciders, woody and, thankfully, fruity. It’s clean and just-sweet, I want to say it’s bitter but then I remember it’s cider, so that dryness I taste is from the barrel, and it manages to retain a certain rustic character, which is nice.
20.25: The pancakes are gobbled down. They worked a treat with the cider; the apples in each matching up perfectly. FABPOW!
20.28: You know what I’ve always wanted someone to brew for me? A 10% imperial oatmeal coffee stout, rich and thick, flavoured with fresh blueberries and maple syrup (maybe a little oak to add texture). I want that beer with a huge stack of fat American-style pancakes, bacon and maple syrup. If I could find Founder’s Canadian Breakfast Stout then that might be the closest thing out there. The trouble is I can’t find CBS, dammit.
20.30: I just spilt some cider on my chin.
20.31: Oh yeah, I’m doing this a day early because if I did it tomorrow and posted it at 9pm then it’s too late, of course. And you could make these pancakes with beer, that’d be great. I only used cider because I’m running low on beer in the flat (beer that's suitable for cooking with, anyway) but have some cider, I also had some apples which needed using up. Ta-da.
20.36: I like a drop of cider. My drinking days began with turbo snakebites – strong and cheap lightning cider, crap and cheap lager, blackcurrant cordial and vodka (that was killer stuff). A few years later it was always the last drink we chose at the end of a beer festival and I’ve had some dodgy old pints of scrumpy over the last few years. Perhaps the most memorable (or not...) experience was a snakebite made from Old Tom and some 8% cider. After that there was some dancing. At a beer festival. Ooof.
20.42: Being distracted by the terrible TV that Lauren is watching...
20.45: I did this thing last year with BrewDog’s Hardcore IPA and their Coffee Imperial Stout. Neither were perfect but not too bad. And I’ve just realised that I haven’t done an As-Live Tasting for AGES!
20.49: Cider gone. It’s pretty good; better than I expected, it just needs more hops. As for the pancakes... they were bloody delicious! I think pancakes might be on the menu a few more times this week (and whenever I make them I’m always surprised how easy they are – just 125g plain flour, two eggs, 300ml of milk, or 200ml milk and 100ml booze).
20.53: That’s me done with an As-Live FABPOW Mash-up. Relocation Relocation is now on.
Posted by Mark Dredge