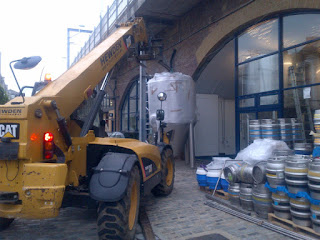 This is my third week of working in a brewery and already I’ve learnt a lot of stuff which I didn’t know before....

Making beer is a lot more than filling a mash tun, transferring it to the kettle, then the fermentation tanks and then filling some containers a few days later. I’ve got a whole new respect for the work that brewers do, the stuff you don’t get shown or told about on the brewery tours; the hidden work that goes into making beer.

Duty is a real bastard for the brewing industry. Seeing how much the brewery pays in a month is just shocking. To work hard to make great beer to then have to pay the government a large wad of money before you can sell it is annoying.

I also didn’t previously realise that just 0.1% ABV makes a difference so it’s no wonder there are so many low ABV beers around and no surprise that big brewers keep shrinking the ABVs on some of their flagship brands.

Tank management, especially if you’ve got more than two tanks and most of them contains lager which is in tank for over four weeks, is something I don’t think I’ll ever have the organisational skills to manage. When new tanks arrive, as pictured above, it takes even more organisation. In November we've got five more tanks coming.

Likewise the organisation of deliveries. Beer goes here, things get picked up from there, and so on. It hurts my brain thinking about it. I’ll happily stick to drawing pictures of beer mats and ‘researching’ other brewery websites.

Beer branding is hard to get right and easy to get wrong. There are many bad ones out there but also lots of great ones.

Brewers listen to strange music. I’m going to spend a day or two in the brewery soon and I’ll be bringing my McFly tapes so we can listen to something good.

There’s lots of things going on all day in a brewery. Most of it is still new to me so I get easily distracted and like watching it. My favourite thing at the moment is either standing in the hop store or watching the Camden Wheat ferment – it bubbles ferociously and I watch it giggling like a one year old saying, ‘look, bubbles!’

Beer on tap in the office is dangerous...

An hour and a half commute each way sucks balls. What sucks even more is that it costs me £400 a month to do it and I end up standing half the way. This also impacts upon blogging time until I move flat nearer to work.

Working in a brewery is every bit as hard, fun and exciting as I thought it’d be.
Posted by Mark Dredge