What's your dream job? Like half the other cohort on the first day of the first lecture on a Media Arts degree, I wanted to be a film director. I have no idea why. I guess it was just the glamorous, glorious option and I knew no better. About 15 minutes into the lecture, as the tutor for Directing talked about his side of the curriculum, he told us to dream on and that none of us would-be movie makers would ever actually be movie makers. Welcome to your future.

The next few years didn't point me in a clear direction of where I wanted to go. Then a couple of years of working still didn't show me where I was going. All I knew was that I wanted to be known and respected for what I did; I wanted to be at the top of whatever profession I chose. Big ambitions for someone with no path.

Writing this blog is a way of being creative. I remember when I started, when no one read anything I wrote, I dreamed of the day someone would comment on it, of a day when maybe I had regular readers who felt about my blog the way I felt about Stonch's blog or The Beer Nut's or Tandleman's or Pete Brown's or some of the good food blogs. The blog was never a way for me to earn money. Over time it developed into a launching pad for me to write freelance while doing the day job. I like that because it means I can just pitch the stories which I really want to write and am really passionate about, rather than having to worry about where I can publish my next words in order to eat my next dinner. That doesn't appeal to me at all. I love to write. Earning money to do it is brilliant. Doing it full time is too worrying. Next I want to write books. But that’s for the future.

At the same time, I never really wanted to work in the beer industry; there wasn't anything or anywhere which was right for me, so plodding along in communications, marketing and social media was fine for me as long as I could write about beer.

But what and where? There's 800 breweries in the UK. Looking around at them, how many would I like to work for? How many could I work for without moving? How many could I make a real impact upon? How many would have a position relevant for me where I'd fit in? There was only one but it wasn't right at the time, so it was back on with the day job.

You can probably guess where this is going... This week I started working in the beer industry. I'm incredibly excited about it because it's a brilliant opportunity for me. A perfect opportunity.

My job is to manage social media, to develop and build the brand, to create the website, to run tastings and training, to manage events, to work with pubs and bars, internal comms, and develop anything that you can physically hold with a Camden Town Brewery logo on it. With just a logo and no brand, a website which goes no further than a holding page, and no social media activity (there's a Facebook and Twitter page but little else, yet), it's a blank page to begin with, which makes it very exciting. And all for a brewery which is doubling capacity between now and November with plans to grow further already in place.

Now I get my chance to make a difference in the industry I love (plus you should see the view from my office now and smell the aroma of fresh wort and hops which greets me when I arrive for work). Camden is ambitious and so am I. I'm coming into this with a lot at stake (longer hours, I need to move flat or pay a stupid amount for the train, working hard) but I know the sort of brilliant things we can achieve. My aim is for Camden to be one of the top breweries in the UK and I know that it'll happen.

The blog isn't changing and it isn't going anywhere. Camden starting talking to me because Jasper reads my blog (I suggested that I helped them get started with social media and we soon realised that I could do a lot more than just that). I love writing this blog so wouldn't have taken a job which would prevent me from doing this or meant that I had to do something different to what I already do. This blog post is me being excited about what I'm doing next but also for transparency; I now work full time for a brewery. I also think that now I’ll have a far better understanding of breweries, brewing and the beer industry.

I now know what my dream job is and tomorrow is my third day doing it. Here's to new beginnings and challenges. I can't wait to get properly stuck in!

If anyone wants to say hi to me at work, wants to talk about the beers or the brewery or come for a look around, or whatever, then my email address is mark@camdentownbrewery.com. 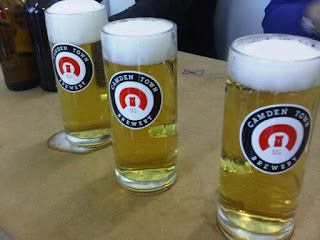