I might not have mentioned this, but earlier this year I made a beer at BrewDog along with Zak Avery and Pete Brown...
We could’ve brewed anything we wanted; the only limitation was nothing spontaneously fermented (though Stewart Bowman, the Head Brewer, would tell us that he’d like to play around with wild yeast in the future). I was interest in brewing an imperial lager (“dry-hopped to oblivion,” my email says), a butch oatmeal stout (perhaps with coffee and maple syrup because that’s a beer I’ve been obsessed with and wanted to brew for years) or a saison with lots of US hops, all of which I thought would work well in the BrewDog range as well as being beers I really like. The others made their suggestions, including another strong lager-style and we politely emailed our way to the happy ending we settled upon.
An Imperious Pilsner it what we brewed – it was designed to be like that lager your mate drinks, just bigger. We decided on 100% Saaz hops while we were at the brewery – before that we were swaying between a variety of different hops and different additions. It was to be 7-8%, as pale as possible, as unfiltered as possible (if we could), and an amplified showcase of noble hops. 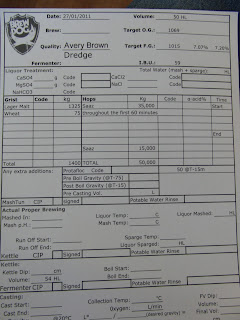 Tradition. Homage. Revolution. That’s how the bottle label begins and that’s the inspiration. It’s about the long lager traditions, about using the same ingredients, having a period of lagering, and tipping our glasses to the lagers that we love. It’s also an homage to beers like Monsieur Rock, My Antonia and Tilted Smile; lagers but different. And revolution because this isn’t just a normal lager and we made it at BrewDog who aren’t just a normal brewery. The label, which is Carlsberg green, encapsulates the whole idea. 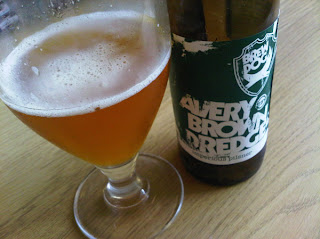 And we did actually get stuck in with the brewery instead of just standing around scribbling in our notebooks. Lugging 53 sacks of malt and mashing it in was hard work, shovelling it out of the copper mash tun was even harder work (or so it looked – Zak had that job), and I was the lucky one who got to stand above the boiling kettle and continuously throw handfuls of hops into it. 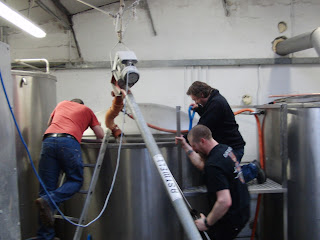 After two months, including the lagering and dry-hopping, it’s ready and tasting great; it’s exactly what I wanted it to be. It’s subtle in its punch, it’s an exploration of the Saaz hop, it’s a simple beer expanded. The body is golden and the head is full and fluffy, so it looks great. The aroma is slightly sweet, a little breeze of yeast, then into floral and orange pith, peaches and apricot, a distant herb garden, all subtle. The body is smooth, the bitterness is dry and crisp, botanical like gin but with bursts of distant fruit, like little surprises to keep you interested. It’s like a lager but different; all the qualities are there, it’s just amplified and bigger, meaning it stretches in different directions.
The beer is currently on sale on the BrewDog website for anyone who wants to try it – I suggest you drink it young to get the burst of Saaz freshness, though I’ll be keeping one or two back to see what happens in a few months. The beer isn’t cheap but then we used a ridiculous amount of malt and hops, plus took up two months worth of ultra-valuable tank space at the brewery.
Avery Brown Dredge is finally here. If you’ve had the beer then what did you think?
Posted by Mark Dredge