As-Live Tasting: BrewDog/Mikkeller I Hardcore You 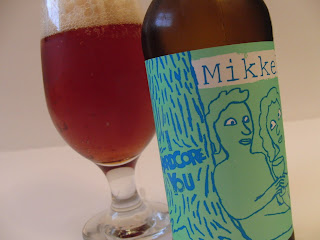 8.10pm: Cap popped off and a routine sniff down the bottle neck gets the olfactory gland’s excited attention. This is an As-Live Tasting of BrewDog and Mikkeller's I Hardcore You.
8.12pm: Poured out and photographed, the beer is beside me at the computer and it’s billowing out aromas capable of inducing intense nosegasms.
8.15pm: Swirl, sniff and slurp. A massive pine attack, hop-overload; a jammy depth to it, something like strawberry chewy sweets; a peppery-ness, herbaceous like a forest during the summer after a flash thunderstorm rocks the earth and trees. It’s good looking, red like the very edge of a lick of flame, a thick head slipping down to a lasting lace.
8.20pm: It should be noted that there’s a programme about Cheryl Cole on in the background so I’m liable to be heavily distracted during this as-live posting.
8.20pm: Somehow the bottle is half-finished. The mega dry-hopped aroma leads the way into the velvety body which bursts of summer fruit and even a hint of vanilla ice cream, then out with a bitterness not too big to clear your sinuses but big enough to claw to your tongue until the next eager mouthful. The balance in this beer rocks. The hops kick off but the sweetness beneath that is enough to calm it down.
8.30pm: The Cheryl programme reaches the adverts so time for a burst of typing... It’s diving down my beer hole in no time at all, dangerously fast in fact, as my head is feeling the distant buzz of booze. At 9.5% this beer is a monster, but it’s a cuddly, lovely monster that makes you want to play with it all afternoon, not run away screaming at its hideousness. Talking of hideous, the label is far from it, and is one of the nicest looking I’ve seen this year – a simple spearmint green, a girl and a boy (the boy looking at a chalice of beer, or perhaps the girl’s boobs; the girl looking into the boy’s eyes – go figure), a tree with an etched I Hardcore You. It’s printed in Danish but it’s somehow understandable to this English-only reader.
8.36pm: I just stood up and the button of my shorts burst off. Seriously. I naturally wailed like a small boy and Lauren promised to sow it back on for me (I’m only writing this as proof to remind Lauren of what she said).
8.40pm: It’s now pertinent to mention Zak Avery. He had this beer last week (I’m behind the times, I know, but I had the beer delivered to my parents house, where, incidentally, my little nephew took a keen interest in the lively box) and reported how to get the best out of this beer, which involves buying a case and burying most of them to stop you drinking them all in one ruinous attempt. It’s pertinent to mention it now because I’ve just opened another bottle (just as my fingers begin to miss the intended targets on the keyboard).
8.47pm: As is the zeitgeist, I’ve asked the internet what they think of this beer. @ThornbridgeKel called it “sublime”, @BeerReviewsAndy says “I love IHY I’ve not got much left”, @swbrewery says “I was really impressed with IHY like a rolling wave of hop heaven-pithy, piney perfection!”
8.50pm: I’m getting a bit dizzy. It’s 9.5% but somehow drinks like a devilish 5.9%-er.
8.53pm: When I first started blogging I got a bit BrewDog-heavy. I felt an affinity to what they were doing and the beers they were making. In the last few months I’ve barely mentioned them because they seem to have released nothing but expensive one-offs of the next strongest beer in the world. What I initially feel in love with with BrewDog was that they were regularly producing new beers, different beers, and interesting beers. I remember my first taste of Chaos Theory and was blown away. I remember my first zeitgeist, Zephyr, 5am Saint. I loved that they got me excited about new beers in the UK. Tokyo* rocked my world, I love Tactical Nuclear Penguin, Sink the Bismark was insane, End of History took it a lot further, maybe too far, certainly too far for my dusty wallet. The thing is, even if I’ve felt a little dispirited with them, I’ve still loved what they’ve done and they’ve kept the UK beer scene interesting in an outrageous kind of way.
9.07pm: That last bit took a long time to write. FYI, for context: The Cheryl programme has finished. Now Big Brother is on (Lauren is in charge of the remote). 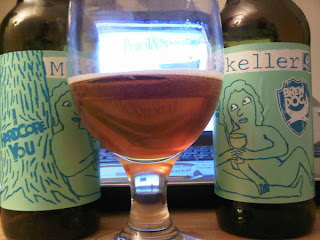 9.09pm: I should probably explain what this beer is... It’s a blend of BrewDog’s Hardcore IPA and Mikkeller’s I Beat yoU plus extra dry hopping. It’s a mix of two beers with a little extra. I’ve never had I Beat yoU but I want it now. Hardcore IPA is an intense beast of an IPA so I imagine IBU has an underlying sweetness which somehow seems to balance everything out in this beer: two becoming greater than the sum of their parts.
9.10pm: I just shoved the glass under Lauren’s nose and demanded she provided an opinion: “It smells nice. It smells like summer. Does it smell like summer? I’m not very good at this... There’s a deep flavour I just can’t put my finger on. Is it quite high in alcohol? [I nod while typing]. Yeah. Smells like it. It’s got a lovely thick, rich... Isn’t it? Like, umm, tropical fruits. There’s something else there... Quite fruity. Here, take it back, I’m watching Big Brother.”
9.14pm: The 9.5% is kicking in. I’ve largely lost feeling in my face. It’s a wonder that I’m still typing with relative accuracy and speed.
9.15pm: @BGRTRob just tweeted: “It's a truly wonderful beer.” Touché my friend!
9.25pm: Holy shit, @ThornbridgeKel just said something big: “I think IHY is the new benchmark IIPA for Europe. It rules!” BOOM!
9.26pm: I’m being distracted by Big Brother. There are men dressed as tacos eating chilli which isn’t cool... One of them just hurled almightily.
9.31pm: The beer’s almost done. I’ve got four more bottles left. I might need to bury some of them à la Avery to stop me drinking them all in one go.
9.34pm: I Hardcore You is dangerously brilliant. It’s an arse-kicking IPA, a tongue-numbing assault on the senses, a face-slapping beer that just makes you want to drink more and more. I think it’s better than Hardcore IPA but I don’t know what makes it so complete; whatever it is, I like it (I think the combination of sexy, smooth body and dominant bitterness without overpowering is probably the winner here, plus the intoxicating aroma). Away from the high-impact thrashing of the boozy arms race, this beer puts BrewDog back on track. To BrewDog I offer a thankful man hug. To Mikkeller I offer the highest praise: a high five.
9.41pm: I’m done. In many ways.
10.07pm: Post script: Just said goodnight to Lauren. She said: “You were drunk Friday, Saturday and now Sunday.” I said: “A hat trick.” And now I’m going to read my book, which is currently Chuck Palahnuik’s Snuff. I will post this tomorrow, which, in the correct tense shall be today.
Posted by Mark Dredge