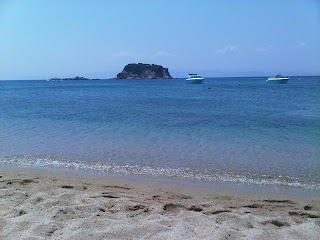 Not much happening, exactly what we wanted. It's hot. To the beach. A different one today, further away. We walk - it's good exercise. It's further than we think. It's hot. The beach is quiet. In two weeks it'll be busy, the Italians will be here, this tour guide told us three days ago on a boat. It's windy, the water's too rough to swim in. We can see the mainland. We went there last week, had lunch. The sand is so hot it burns our feet when we leave, jumping across it, searing pain up to the knees. We walk back. Lauren doesn't talk to me much on the way back, she said I was staring at this girl. This girl was okay, the one I was staring at. I was mostly just reading The Rules of Attraction. Rock'n'roll.

Later. We go to the other beach, the close beach. The sea is calm, shimmering and bright blue. Lots of leathery skin all around, pink, brown, flashes of white. Girl with Page 3 tits sits next to guy with Men's Health pecs. Next to them an old couple lie wrinkled and brown like walnuts, asleep on their loungers. Next to them a kid makes sandcastles. His dad stares at the Page 3 tits, the kid's mum reads Mills & Boon, or chicklit or something. I read some more, remember the film, but not that well and decide to watch it again when I get home. Swim. Find a sunset red starfish that looks fake but isn't. The sea is still except for the occasional breaking wave from a cruise ship that passed by 15 minutes ago. Fish all around, some at the surface, some on the sea bed, little darts of silver. Play frisbee back on land. We manage 93 before I drop an easy one. Buy water, beer, fruit and crisps on the way home. Read some more while drinking an Alfa on the balcony as the sun moves out of sight, behind us. One couple are in the pool. She's terribly overweight, tattoos on her shoulders, he's thin, sunburnt, a beer on the pool's edge. They talk too loudly.

The waitress at dinner really doesn't care. I order moussaka and 500ml of house red wine (four euros for the wine). I ask for fried potatoes too. That's what they are called on the menu. She doesn't understand. I point to where it says fried potatoes. Chips, she says. Chips, I say. The moussaka comes in a ceramic pot which means it's beyond hot inside. Lauren doesn't like her dinner so I eat some and it's just okay. She looks good, her skin tanned, little freckles on her nose. I finish the wine.
More bang for your buck, I tell Lauren. I have to explain what this means. She doesn't drink, does she.

Bastard mosquitoes are everywhere. In the night Lauren jumps out of bed and launches a trainer at the ceiling. She turns the light on. I was asleep. It's a fucking cockroach, she screams. It flew in my face. I tell her to turn the light off while she's hitting the cockroach with a broom. It's still alive, she says as she throws another shoe at it. Got it, she says. It's too hot to sleep.

I finish reading the book in the morning. It makes me want to write something. I miss the tap of the keyboard but love the messy scratching of the pencil on paper. Writing in the sun reminds me of Hemingway's The Garden of Eden (without the lesbians or elephants). I'm sitting by the pool, Lauren is on the lilo, unknown pop music is playing somewhere. Later we are going to the beach. Lauren just fell off the lilo.