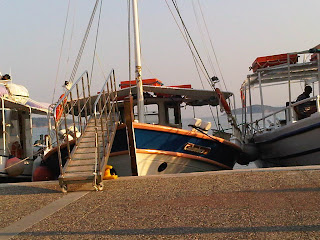 A face craggy with a life at sea. Sun, salty air, cigarettes, wind, frowning against the bright glare. Salt and pepper stubble, thickly spread, grey whiskers above a dry top lip. Hair upright as if stuck in a permanent headwind. Lines etched across his face from years of the same expression, from the same stare out to sea. Thick arms and wide back stretching his blue shirt, veins over his paw hands like rope, always shoeless, running around the boat as if he were moving carefree fingers over his wife's body in the dark. A soft, powerful nicotine-gruff voice, a tooth missing. He could be anywhere from 35-65 years old, there's no way to tell. The years pass differently at sea, I hear.

And at his feet someone follows. A son or grandson, fluffy blonde hair, fudge-coloured skin, maybe eight years old, a big smile missing his front teeth, soft and thin arms, copying everything the captain does, knowing what to do, winding the heavy ropes, standing on deck looking out, pretending to be his obvious hero, grown-up and trying to impress. And when we stop he jumps into the sea with a childlike squeal, jumping off the top deck, swimming to shore, climbing on board, jumping off again. And we sail again. The two stand side-by-side at the front of the boat, the Captain invisibly, perceptibly with his arm around the boy, smiling, proud as they take the same stance, hand over brow, looking out over the inky water. And then he gets to be the Captain, the boy, and sail across the expanse of open sea. I've never seen so much joy, excitement, command or belonging in a young boy's eyes. He was born to be on the sea, just like the Captain.

(No beer in this post, I just couldn't resist writing about these two. The trip was supposedly the Sporades Sunshine Cruise but was actually an ostensible Mumma Mia Experience, the soundtrack playing throughout, the 'look to your right, that island is clearly shown in the background of a scene, in the scene someone is singing and dancing on the beach' or 'this beach was in the film' or 'if you want to go to the church then you can but you'll have to pay a taxi driver and you'll miss your lunch'. The Captain was actually in the film. He'd be hard to miss - he's the one who looks like he's made from old oak, rope and sand. The boat in the picture, we were told, was also in the film.)