I met Matt the day I started university. He was staying in the room next to mine. We bonded over Chatham (I went to Chatham Grammar school, he went to Chatham House) and our yet-to-come-out housemate Iain. He is also the one who got me into real ale, so I’ve got lots to thank him for, and if you see me out drinking in London then he is likely the guy I’m drinking with.
It’s taken almost two years but he’s finally written a post for the blog (probably only because he might win free beer out of it). Hopefully, because I think it’s brilliant, he’ll write a few more. 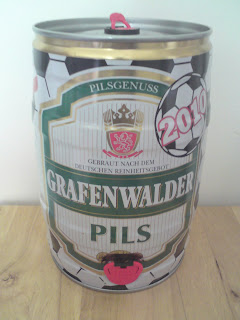 … cheers Marky. The one team I didn’t want to be cheering on, no matter how many hops are on the line. I instantly gave up on the idea of winning any beer, as would surely be toppled by at some point on their way to a glorious victory over in the final. Some lucky chap got in the sweepstake, and will be sitting there on July 11th sipping an English bitter, and wondering if life gets any better.
(OK so it didn’t quite work out that way, but blind optimism is a lifestyle choice and I’m sticking with it).
I could not be short of inspiration for this task, as has a rich and illustrious history in both the beer and football departments, and if I had chosen to base my beverage on their beer credentials, a world of delights awaited me. I could have raved about a creamy kolsch, admired a refreshing pilsner, or even got a bit smoky with a naughty rauchbier. I could have done this while talking about German beer purity laws, Oktoberfest, steins, bratwurst, pretzels and numerous other subjects which paint in an impressive light.
However, this is world cup time and I approached it from a football perspective, which as an English fan talking about the Germans means jingoism, patriotism and no short measure of stereotypes. My selection of beer would represent nothing more than national pride, resentment and prejudice toward the dull, efficient, mechanical and bloody successful football team they insist on producing every time a major tournament comes around. They can beat us on penalties and make Gazza cry all they like, but I can tell the world that they make substandard beer. So I didn’t search the web, I didn’t go to any of the excellent German food markets or delicatessens around , or even an awesome bierkeller; I went to LIDL in .
Walking around the world of unpronounceable bargains, I looked for an appropriate beer to chastise and deride. I found my prey right in the middle of the utilitarian warehouse, a 5 litre keg of Grafenwalder Pils, decorated like an old fashioned football, all for the bargain price of 10 . I stocked up on chocolate, cured meat and lemonade, and set about lugging it all back on the bus across .
Keeping it cold was a challenge – I had to remove pretty much everything in the fridge, including some of the shelves. I also had to think about when I was going to drink this thing – 5L is somewhere north of 8 pints, which is a lot to drink during the week, especially if working with a hangover is not one of your talents.
I started on the Tuesday, and attempted my very best tasting notes, because as much as I wanted to dislike it, it was still a beer and deserved due care and attention. My initial reaction was cold, mainly. And fizzy. But I can do better than that, surely.
It poured a rather lively pale yellow, with a clean white head that dissipated quickly, and clung in unattractive patterns to the edges of the glass. The aroma was slightly bready, a touch of grassiness, and generally ‘beery’. It tasted very clean, almost to the point of being soapy and antiseptic. There are some doughy, caramel notes too sweet for the lack of bitterness, and just enough grassy hops to remind you that something in here grew from the ground. Light and watery with little texture or body, it did however have a nice refreshing quality, and a boozy finish which made me feel like I was drinking more heavily than I was, which is always nice when watching football. My girlfriend also assures me it delivers an excellent shandy.
I retrieved it form the fridge on night 2, and it was much better. This may have been because I had just watched beat while drinking probably the best lager in the world at my boss’s expense, but whatever. I had a few very jovial glasses and started to think I had misjudged this brilliant, misunderstood beer. Again, thumbs up on the shandy.
Night 3 brought things into perspective, not only because half of the remaining beer had slowly dribbled from its container into the crisper. The life had drained from this once great beast, and it told. Flat, lifeless and devoid of flavour, it was a real chore to dispense with the remaining liquid (I did though, it’s still beer). Thumbs down for the shandy too.
So in summary, I attempted to balance out ’s massive inferiority on the football pitch with some good old German bashing, which to an extent worked just fine. But actually I had quite a lot of fun both finding and drinking the beer, which helped give more than one evening plenty of merriment. I watched v on Sunday, and they were far superior to us in every department. But as I drank with my friends Fuller, Smith and Turner, I was comforted by the fact that I could take pride in something English on a daily basis. Still wish we were better at football though.


Cheers Matt. Only eight people are left in with the chance of winning and we're still missing lots of blog posts. If you aren't still in and you haven't posted then I hope you still do. The deadline is the World Cup final so get them posted by then!
Posted by Mark Dredge