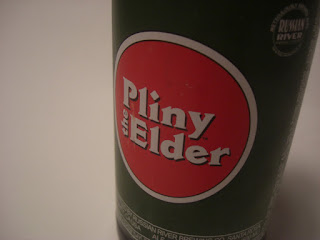 Just a midweek quickie about a brief love affair I had with a gorgeous Californian babe. I’ll never forget her. Although I’ve heard that her Younger sister is pretty tasty too...

Pliny the Elder and Pliny the Younger were top of the ‘I want these beers’ list I gave to my mate Lee when he went to San Francisco. To my supreme delight he managed to get me a Pliny the Elder and soon became my hero. I opened the beer a few weeks ago and oh-my-goodness let me tell you this: it was one of the finest beers I’ve tasted.

It’s 8%ABV with a deep gold colour and a beautiful oh-so alluring aroma-vault of juicy citrus, tropical fruit, pine and grapefruit pith. The balance over the palate is what makes this beer special: it’s so fruity and this dives quickly into the bitterness - the sappy dryness of pine, loads of citrus, loads of tropical fruit - but beneath all of this freshness is a huge malty base of biscuit, bread and caramel; a sweet buffer for all that quenching and clinging bitterness. It’s so smooth to drink too. Fizz pisses me off and I have a low threshold for it, but this was just brilliantly, elegantly clean. My tasting notes are peppered with superlatives, ending with ‘an amazing beer’.

While we’re here, Pliny the Younger is currently the 2nd best beer on the BeerAdvocate best of list (PtE has risen up to number 8! And PtY is pretty high up Rate Beer's best too). Of course this is because so many drinkers have rated it so highly, but why is that? It can’t just be because it’s such a good beer, can it? Look at the rest of the list (Westvleteren 8 and 12, some Dark Lords…) and you’ll see a mystique surrounding a lot of the beers. But why PtY? Well, I read over at The Beer Nut’s place, in this post, that the Younger was only released on draft this year. Ah, now I see why. This means that drinkers have to go in search of it which instantly raises their anticipation of it (hunter-gatherer style) – it is coveted. Add to this that the hype is already huge (the hype is very affecting) and the fact that an 11% IPA is going to leave you feeling pretty happy (the fun-time/drunkenness/remember-the good-stuff-and-make-it-better proportional scale) and I think you get the drift. Although, if it’s anything like the Elder - only better! - then I 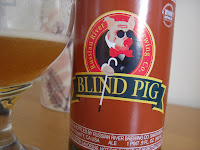 totally get why it’s there in that position.

Oh, and I also got Russian River’s Blind Pig IPA. A 6.0% beauty along the same lines at the Elder. It’s a glass of orange, pine and grapefruit, fresh and juicy but dry and bitter. The malt isn’t in-your-face which means it isn’t cloying, but it still has a mouth-filling thickness which is addictively moreish. It doesn’t get top billing in this post but it’s still a super beer.