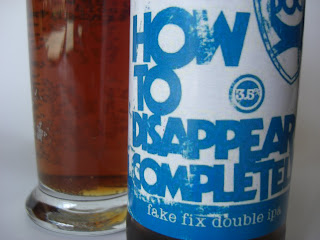 17.10pm. Evening all. It’s been a bloody lovely day here in Kent, I’ve just got back from Whitstable and now I want/need a beer. And it’s a new beer tonight – BrewDog’s How To Disappear Completely. A 3.5% imperial mild-slash-imperial IPA with a theoretical 198 IBUs. Yeah, 198!! This surely renders all hope of balance out of the question!?

17.14pm. It’s poured and the picture’s been taken. It’s darker than expected; a deep caramel colour. Time to get in there and see whether a superheroically bitter beer can work at 3.5%!

17.16pm. Wow, what a nose!! It’s an immense monster; a billowing tower of olfactory pleasure. The hops are properly condensed and turned up to way beyond 11. The first and most startling aroma is fresh tobacco and tea leaves; it’s a musty sweetness, intoxicating. Beyond that it’s grapefruit and tangerines roasted to just before burning point. There’s also caramel too, in a toasted sweet bread kind of way and possibly overcooked vanilla custard. It’s really something to dig your snout into.

17.19pm. Before I dive in, a word on balance. Balance in beer is good. It’s that delicate see-saw between sweet and bitter. Anything that tips the scales at either extremes loses some of its enjoyment, in my opinion. It’s pretty tough to get body into a 3.5% beer, and not that easy to get a heck of a lot of sweetness but it is easy to make it bitter by adding a lot of hops. What the hell will come of this beer?! I’m going in, watch yourselves tastebuds!

17.22pm. Oh my goodness… The words are in there but not coming out… need another mouthful… woah that’s HUGE! Bitter yes, but it’s got such a great mouthfeel (how much crystal malt did you use?!). It’s toasty grain for the smallest fraction of time before your tongue gets beaten into a hop submission. And it’s unabashedly unrelenting. It doesn’t roll in, it smashes in. It’s that super-condensed kind of bitterness, a tangy, clawing, fill your mouth bitterness. But I think it works…

17.26pm. I’m feeling a bit dizzy with that hop-induce fug of calm. This is another intoxicating brew from the furthest reaches of outer Scotland. It’s intoxicating because it flips your head inside out. It feels like 8.5% not 3.5%. It’s as bitter as a beer can go. And it’s got a roll-around-your-tongue thickness. Have you had Sierra Nevada’s Torpedo IPA? It’s like that in the mouth.

17.30pm. I just read the BrewDog blog about this beer and it was mash-hopped and first wort hopped, two virtually unheard of practices. The dry hopping was pretty epic too; 15HL of beer was abused by 20kg of hops! And it really does showcase the raw brutality of the hop in its most condensed form.

17.36pm. My Grandad, my Dad’s Dad, used to smoke a pipe. I remember going to his house and pretending to smoke it as a young boy. It had a very distinct smell. It was him, plus the pipe, plus its leathery case, plus the sweet flecks of tobacco. It’s a surprising olfactory madeleine; a re-enactment of 15 years ago and a memory which I didn’t know I had.

17.41pm. I’m listening to Radiohead’s How To Disappear Completely. It seems only right as that’s what the beer is named after. The combination of beer and song works strangely well in a juxtaposition kind of way; it’s a contemplatively haunting song while the beer is a 1,000 mile per hour hop rocket which makes you dozy. The lyrics have a haunting similarity too. Strobe lights and blown speakers, fireworks and hurricanes, I’m not here, this isn’t happening.

17.48pm. I’m fascinated by this beer. I love bitterness and its potentially innate physiological powers, which I wrote about here. It’s a beer which commands your attention; the fear is that it might just be able to kill you. But I like it (of course I do, it’s a BrewDog for goodness sake). I like how it has got just enough sweetness to make it drinkable and I love how it hovers just below the that’s-too-bitter threshold; it’s an unbalanced balancing act.

17.55pm. I can’t decide if I want another now or not? Half of me does (the pleasure-pain loving Id) and half of me doesn’t (the sensible side, the Ego). I can smell the barbeque from where I sit so I probably won’t; it’s possibly the least food-friendly beer I’ve ever tasted (remember the Hardcore IPA As-Live?). Just don’t bother having it with dinner unless it’s a meal you hate.

17.58pm. As the BBQ is getting nearer I think I’ll open a bottle each of 77 lager and Zeitgeist to eat with it. And if you didn’t read it, check out the latest food and BrewDog stuff that I did here (believe it or not it’s 77 and Zeitgeist with a BBQ!! – what a coincidence!). Oh yeah, you can buy How To Disappear Completely from the brewery here. Give it a try and let me know what you think.

Bonus Features... I also shot a video of me opening this beer which I have posted on my youtube channel. I’ll probably start uploading a few videos over there which I don’t put on this blog. There are some pretty cool video beer reviewers out there on youtube and they are worth a look.
Posted by Mark Dredge