Beer and Baseball and Some IPAs 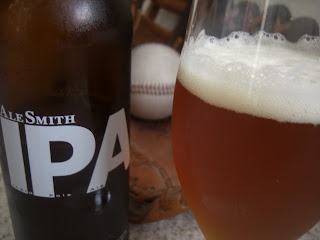 The baseball season has started! I am a huge baseball fan and spend a ridiculous amount of time fretting over my fantasy baseball team (I play here). For the last few years I watched it on Channel 5 and the coverage was brilliant, well worth staying up until the sun starts to rise just to tune in (stupid time difference!). This year Channel 5 haven’t picked up the baseball, which sucks, so instead I bought the mlb.tv package. This means I have access to every live game, and that’s way over 2,000 throughout the season. Here’s to a summer of broken sleep!

But what do you do when you watch baseball? You drink beer of course (some of the first posts I wrote for this blog were about beer and baseball and the stuff I drank during the 2008 World Series, check them out here). For opening day this year I decided to pop the cap on something that’s been in the cupboard for too long, something that I’ve been desperate to try: AleSmith’s IPA. It’s 7.25% and pours a wicked sunset flame colour with a thick yellow foaming head. Straight away it’s tangerines, oranges, grapefruit and a little sappy pine in the nose, hidden beneath that hop-whack I got pineapple and even creamy white chocolate. It’s such a clean and fresh tasting beer, really juicy and gluggable, lots of toasty caramel malt and then a piney and bitter tang to finish, with peaches and a floral note. This beer is stunning and it’d be even better if you drank it super fresh. I want more! I got mine from beermerchants but they don’t have any left – Phil, please get more! And it was perfect for the baseball (plus it was a warm day and I’d just come back from a run so it went down like a dream).

While we’re here, I’ve had a couple of other IPAs recently which are worth writing about...

Port Brewing Hop 15 is a 10% monster of an IPA. It’s a golden amber colour and has a citrusy, piney, juicy nose – a dreamy IPA aroma. The body is thick and luscious and it carries the 10% well and brings a wave of fruits – tangerine, roast apples and grapefruit – followed by a long, dry and bitter finish. There’s a lot of sweetness in this beer but it needs it to balance the hop attack. I really loved this beer and it’s another which I bought from beermerchants and it's still in stock.

Great Divide’s Hercules Double IPA is a 9.1% face-melter. It’s 85 IBUs of pine beneath its electric orange colour. The malt is toasty with just enough sweetness, but it’s the bitterness that owns this thing as it digs into the sides of your mouth, clawing its way down your throat. Beneath the pine (with its mint, white chocolate and herbal qualities) I’m sure I detected some distant orange groves but they were sadly too distant. It was all a bit overpowering for me and the balance just wasn’t quite right. Maybe I had an old bottle because I remember enjoying it a lot more the last time I had it.

Another pine attack came from Mikkeller’s Simcoe Single Hop IPA (6.9%). It’s a fiery orange with a densely resinous aroma milling around with citrus zest and leather. The nose is almost eye watering and the bitterness on the palate is much greater than I expected - it’s like licking a pine cone (dry, woody, astringent, piney). There was some toffee sweetness but not enough for me. Kinda nuts, kinda cool. 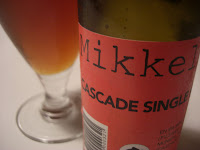 And right now I’ve got a Cascade Single Hop IPA from Mikkeller and it’s got that same flaming colour and a big billowing head as the Simcoe (which makes sense as it’s the same base IPA). The nose is citrus, pithy lemon, a slight sourness and a touch of pine (I taste pine in everything nowadays). The first thing in the mouth is the bitterness and it’s huge. But it gets softer. It gets really drinkable. There isn’t much malt sweetness, just some toasty bread but that doesn’t matter, it’s all about the Cascade greatness. And now I get it. It isn’t a juicy hop and it isn’t that fruity; it’s dry and pithy, imagine the aftertaste of a grapefruit and you’re there. The bitterness is all at the end and it doesn’t go away, it’s gooood, it’s assertive and up-in-your-face. I finished it quickly and I wanted another one right away. I like these single hop jobs, I need to try some more.

Expect quite a few beer and baseball posts to come from now until October. I’ll be doing my best to get as much new US stuff as possible as the season goes on, especially as my thirst for IPAs continues to be insatiable.