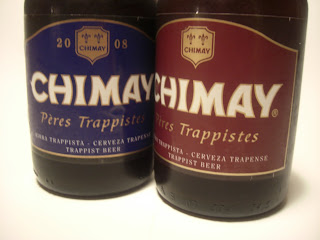 It’s Monday 23rd February (quite a while ago now, oops) and here’s an as-live comparison between Chimay Red and Blue.

20.16pm: The first beer is poured and it’s the Chimay Red. A 7% trappist ale. A murky burnt copper colour, thin head. A nose of burnt sugar and roasted fruits as well as stone fruits and some apricot.

20.18pm: First word to mind: fizzy. It tingles the tongue, grazes on the way down. Beneath that it’s stone and roasted fruits and dark sugar. A complex and slight sourness.

20.22pm: I’m getting a depth of spice from the beer now. It’s going down quickly tonight. I had a huge gym sesh earlier. It was mega busy though, a real sausage fest of pumping testosterone and not a fit young girl in sight. Rubbish.

20.25pm: I’m letting the beer relax a bit to numb the fizz; it prickles and I don’t want that. In this episode of Flight of the Conchords they declare that they don’t like beer! What the hell?! Murray the manager tells them that it’s cool - it’s rock ‘n’ roll - so that’s fine by me. It does look like a lager they’re drinking though.

20.28pm: These are crown tops, by the way. And both bottles are pretty new; there’s no age to them. I think I got them from Waitrose, but it may have been Tesco, or even one from each.

20.32pm: The beer is getting smoother, fuller, richer. More fruits are coming through and a nice bitterness to end it. There’s pepper too, toasted brown bread and nuts.

20.34pm: Did you know the brewery makes cheeses?! I want cheese now… though I pretty much always want cheese.

20.42pm: Red done. I liked it. Fairly complex and drinkable but for me the carbonation was too much. Maybe I just didn’t give it a chance to settle in my thirsty haste. Bring on the Blue. Oh, and I would drink a White (a Triple) too but I don’t have a bottle.

20.46pm: Masterchef is on and the Blue is out. It’s darker; I’ll call it russet. It’s 9% ABV, the nose is sweet, dark sugar; a bag of sticky dates. Now this is a lot bigger than the Red. Boozy and rich, strong and rammed with flavour. Loads of dark fruits, dark sugar, a tangy bitterness.

20. 56pm: The phone rang when I had a mouthful of goats’ log! I took the beer with me and I think it worked but I was concentrating on answering the call so can’t be certain. I’m back on it now.

20:57pm: Cambozola, a creamy mild blue, is up: it’s a great little match and the beer sweeps the palate clean and the deep fruitiness in more pronounced. This is a yummy cheese.

20.59pm: Blue Shropshire next. It was reduced at the supermarket and tastes damp. The match is kind of average. If anything the beer masks the musky, dry taste of the cheese. Pretty lame.

21.01pm: Colston basset stilton. A blinding cheese. A constant in the fridge and the match is a goodun’: rich cheesy funk and the complex beer party their asses off.

21.05pm: Masterchef finished and Flight of the Conchords is back and this beer is getting better and better. The date-and-fig-like fruitiness is rich and sweet and fantastic. I’m getting bready yeast up the nose with the dried fruit, like a fancy slice of tea cake.

21.08pm: Cherry brandy! And it’s warming me. Speaking of warm, the temperature has risen (it’s about 10C I think) and the garage is now approaching perfect cellar temperature so I can transfer a few beers out there to keep cool.

21.10pm: This is the start of a Trappist/Belgian week in preparation for a Westvleteren 12 (which I wrote about here). I’ve blitzed my palate with mainly American beers for the last few weeks so I want to jump over to Europe to limber up my tastebuds in a different way. My polygamous palate.

21.14pm: This is an easy drinker which is surprising for the 9% ABV. It’s getting better still and I know that the last mouthful will leave me wanting more - that’s a sign of a good beer. I might have to pick up a few more next time I’m shopping.

21.18pm: I’ve just remembered that this is billed as a comparison. So here it is: the Red is a nice beer, plenty of complexity and depth of flavour, but it pales in comparison to the Blue which is just a superb beer all round. The Blue is a flavour bomb with dried fruits and bread and a mellow smoothness. The cherry sweetness is a delight.

21.21pm: I’m waffling on now. The beer’s almost gone. I’ve passed an hour and I’ve had some fun. I like this whole ‘stream of consciousness’ writing. Chimay Blue is a gorgeous treat of a beer.

21.25pm: The beer is gone and I want more. I’ll console myself with Flight of the Conchords. Over and out.
Posted by Mark Dredge