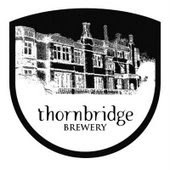 Yesterday I met Stefano and Kelly from Thornbridge Brewery. It was a meet the brewer event held and arranged by lovebeeratborough. Basically, we beer fans turn up and get to listen to the chaps from the brewery talk about their beers while we sit there drinking them. It was brilliant fun!

Thornbridge Brewery’s tagline is ‘Never Ordinary’ and I like that; it’s fun, playful, open, experimental, forward-thinking. Hearing these guys talk about their beers, enthusing passionately, eloquently, intelligently, articulately, is fascinating. They are more like rock-stars or movie-stars, with their good-looks, cool dress sense and long, dark hair, than they are brewers. Stefano, the Head Brewer, is Italian and has this shy-blasé-cool thing going on, he’s softly spoken but everything he says I want to listen to. And Kelly, the Production Manager, a New Zealander, is like a mate you haven’t met yet, instantly friendly and a guy you’d love to sit down with and ’chat beer’ for hours. Seriously, these guys make the whole science of brewing super sexy and they know so much; they speak the language of beer like poets.

The first beer we tried was Seven Heron, a 3.8% pale golden ale created by Melissa Cole (a partner with LoveBeer and a cool beer writer). The beer is light and quenching with plenty of nibbling hops to finish. A good way to ease us in to the sampling session.

Next came Jaipur, their most known beer and a quality drop. It’s a 5.9% IPA hopped with Chinook, Centennial and Ahtanum. There’s a big malty base beneath the biting hops, with lots of grapefruit and tropical fruits. I’d had the bottled version which was ‘softer’, fruitier and more buttery caramel malt, but the cask stuff was super. Jaipur is one of the best British IPAs around right now (Punk IPA, Meantime and Skrimshander are up there for me too). They call it dangerously drinkable and have even verbalised the name - I am Jaipured – as an expression of drunkenness.

A special edition of Halcyon, a very gluggable 7.7% IPA, followed. It was a 2008 vintage of a new idea at Thornbridge (the idea, if my fuzzy head

remembers correctly, is to take the big base of Halcyon and add a different hop to it each year creating a vintage which shows off the qualities of that individual hop and the hops’ terroir). This beer is wet hopped with Green Hereford Targets (there’s some Derbyshire Fuggles in there too and they use a Belgian yeast) and was fantastic; unbelievably fresh with citrus fruits and strawberry aromas, biscuity malt and then great aromatic hops.

Things stepped up from here and went into awesome mode. The chaps brought out Alliance, an 11% strong ale which was only bloody brewed with beer mega-star Garrett Oliver! But they didn’t just bring one, there were three… The normal Alliance; one which was then aged for another two months in Pedro Ximinez Spanish oak casks; and one that was aged for three more months in American oak casks which previously held Madeira. We had them in a vertical-style tasting and that was insanely good. The base beer is stunning, fruity and bold; the sherry cask took on a dried fruit quality and a big richness; the Madeira cask was nutty and full of juicy stone fruits. Matt, my date for the event, loved the original one best, while I was torn between the other two, changing my mind with each sniff and sip of the gloriously intoxicating beers. This was an incredible and unique experience and fascinating to see how barrel-aging imparts its own characteristics. Wow-inducing.

We valiantly continued. Next came Handel which was around 6% (I don’t remember the specifics; I was already reminiscing about the Alliance) and created in collaboration with a young American girl who visited the brewery to try her homebrew on a larger scale. This was another special beer, a one-off. It had all the qualities of a Belgian beer with the spicy fruit aromas suggesting it’ll be thick and syrupy, but it’s actually wonderfully light and drinkable, surprisingly so. It’s a Euro-American mix and a damn good one. 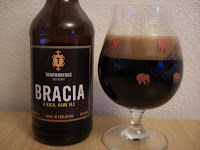 One more. And it ended with a bang: Bracia. I had tried this the week before and adored it. It’s 9%, thick and dark, brewed with Italian chestnut honey (which is surprisingly bitter) and bottled conditioned with Champagne yeast. This is one of the best looking beers I’ve seen in ages with its deep brown head (excuse the poor picture quality; I was in such lusty admiration of the beer that I had to hurriedly snap it). It has amazing aromas of chocolate and honey, loads of nuts and coffee. My tasting notes from home even features the word Pfwoar! There’s a load of dark chocolate in the mouth, bitterness, some berries, smoke and a hint of something zingy and fresh. It’s boozy and strong, rich and complex and there’s a fascinating earthy/beefy/savoury note which will make it a brilliant match for chocolate desserts.

And that was that. We stayed around after chatting to Stefano and Kelly which was great. They are so friendly and approachable and hearing them talk about their beer is brilliant; they speak with pride and love and their enthusiasm is contagious. It’s fascinating to hear about the brewery and their set-up, the way they have progressed and the way they think as brewers. They stand behind the terms ‘Innovation’, ‘Passion’ and ‘Knowledge’ and spending just two hours with them and their beers, these terms shine through: when you hear about it from these guys, beer is not just beer, it’s a whole lot more than that.

Afterwards we went down into the Rake to drink some more of their beers (they are on tap in there all week so make sure you hurry down, if not you can buy their stuff from Utobeer in Borough Market). Between us we had a Seven Heron (lovely), a Halcyon (fantastically drinkable, big), Jaipur (much hoppier off cask compared to the bottle, but brilliant for that reason) and we were lucky enough to grab a cheeky half of Saint Petersburg Imperial Stout (7.7%) which was mind-blowing: rich and creamy, smoothly chocolaty, just gorgeous.

Then I had to go home and I left for the train suitable Jaipured. Thank you Thornbridge and LoveBeer, I had a fantastic time.
Posted by Mark Dredge