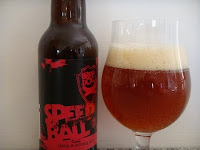 It’s about drugs. Did you know that a Speedball is a potentially lethal cocktail of cocaine and heroine? I didn’t until I went to wikipedia. It’s dangerous because cocaine raises the heart rate and heroine slows it down. It sounds pretty crazy to me. As a sensible, law abiding, Englishman of 24 with a decent education and a job and a car and a girlfriend and two pet fish and a love of good beer I consider myself fairly normal. There is no way I would ever inject myself with cocaine and heroine. That’s insane.

I will however happily drink a beer that has the same name, a beer which contains guarana (a tropical berry full of caffeine, thought to increase alertness and mood), kola nut (a stimulant) and California poppy (California state’s flower and a mild sedative). Plus the natural depressant qualities of the hops and the alcohol in the beer. It’s fast/slow, it’s different, it’s unique, it’s provocative, it’s BrewDog.

The attack is not on the beer itself. It is on the naming and marketing of it. BrewDog is a brand and we recognise them because they have built up such a great brand image. It’s what makes them who they are. They are punks. This is a punk rock beer. It’s a punk rock craft beer, which is sold at a premium price at specialist retailers. The type of person who buys this kind of beer – I may be over-generalising here – is educated in beer, is interested in good beer, is willing to pay the price for it and (most importantly) is not going to associate it with a killer cocktail. This sort of beer can not be considered alongside a standard premium lager; they are very different beasts aimed at massively different markets.

So what it has drug connotations? So what it’s called a ‘Class A Strong Ale’? And yes it was probably designed to get this kind of response (that’s good marketing), but so what? Let’s not forget that alcohol is a drug itself. And hops are related to cannabis (and have you ever had Cannabis beer? I have). We know alcohol is a drug and we make the conscious decision about whether or not we want to put it inside our bodies. We make our own mind up. We are not forced to drink it.

I think the Portman Group are silly. Why are they punishing an exciting young brewery for being provocative? Why are they punishing individuality? Does the beer glamorise (or even mention) the Speedball cocktail? And does it make you want to inject yourself with cocaine and heroine? If it does then it is you that needs to be taken off the shelf, not BrewDog.
Posted by Mark Dredge