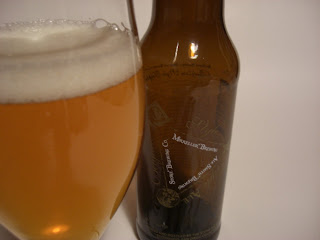 20.10pm. This is an as-live tasting of the Belgian Style Triple Ale which is a collaborative brew between Stone Brewing Co., Mikkeller Brewery and AleSmith Brewery.

Basically I decided to open a beer tonight and thought I’d write my notes straight into the computer and publish them right now, unedited.

Allow me to set the scene: Location, Location, Location is on in the background (I love Kirstie Allsopp) and I’m at my desk. The beer is downstairs. I do currently have better things to be doing, but I’m feeling lazy and I want a beer. Let’s go!

20.13pm. Beer opened and poured, photo taken and back to desk.

20.16pm. Let’s drink! It’s so smooth and creamy (there must be oats in it?), feels way below its 8.7% ABV and it’s light. Loads of malt; clove spiciness; toned-down American-style hoppy finish; orange pith and peel. The booze is coming through more now.

20.20pm. I’m reading the bottle… It has a tag-line of ‘Triple the Breweries, Triple the Brewmasters, Triple the beer…’ That’s pretty cool. The whole concept is good; I like it. These are three of the most forward and progressive breweries in the world so a collaboration is really interesting.

20.24pm. I get back to the beer. More fruit comes through now and it’s more mellow, creamy. There’s something biscuity about it, maybe the malt-yeast combo? I get some pepper and pears too. There’s spice, there’s malt and there’s plenty of hops to finish and it’s Europe meets America. It has a definite Belgian twang, whatever that indeterminate description may mean. It’s very drinkable for a beer of its strength, but I’m wondering when it’ll blow my mind?

20.33pm. This beer is sliding down quick. But it feels a little flat, as if the carbonation has let it down.

20.35pm. Is this as-live thing working? It’s doubtful. I’m cruising Beer Advocate right now. I’m desperate to drink more AleSmith beers. I’ve got some Stone downstairs but I won’t have another now. I’m going to Utobeer on Saturday (before/after the Thornbridge tasting at the Rake) and I think I’ll pick up some more Stones.

20.40pm. I’m enjoying the beer-buzz, that airy sensation of feeling relaxed after the first beer (especially a strong one).

20.44pm. The beer is gone. I’m left kind of perplexed and undecided by it. I enjoyed it but I wouldn’t buy another one. It’s very drinkable and light for its strength - fruity, spicy, bready - but I have a feeling that it’ll be soon forgotten (except that it’s been posted here for eternity, or so).