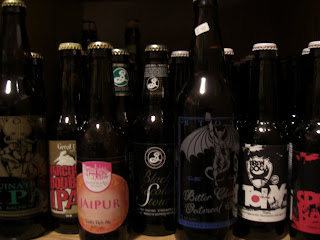 I keep my beers in three places: a box for the ones that I can/will drink at any time - ‘standard beers’; a cupboard of beers which I don’t have ready access to, rare beers – ‘special beers’; the other place is a special cupboard for vintages.

The vintage cupboard and the box are fine. They don’t bother me because the box I can raid at any time and the vintages I won’t touch yet. It’s the other cupboard which gets me the most. In there are the beers which I most want to drink, but they are the ones which I am most reticent to open. I suffer from a worrying complex. I fret about it. I place the beers in there excitedly, knowing that I’ll open them soon, but once they get in there I get scared. It’s like stage-fright. I take a bottle out every now and then, I look at it, I read the label, I think about it, then I put it back. I often choose a beer from the box when one from the cupboard is what I really want. I’m afraid of it, in a strange kind of way. I feel guilt.

I’m worried that I’ll love it and won’t be able to get another or, conversely, that it’ll underwhelm and disappoint. I use the ‘it’ll improve if I leave it another month’ line. I think that today is just not special enough to open a ‘special beer’. And I just like seeing the bottle in the cupboard as part of the ‘collection’. It’s a terrible affliction.

Am I alone in this guilt-twinged beer hoarding?
Posted by Mark Dredge