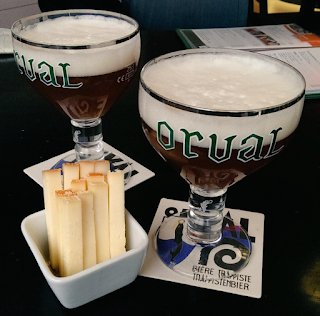 In my Golden Pints I struggled to pick out one favourite non-British draft beer. So, like I did in 2014, I’m picking out a few of the beers I enjoyed most from my travels this year (a few of which were drunk during the research of The Best Beer in the World).

In February I went on a road trip around the Belgian Trappist breweries. Chunk and I stayed at Orval and got really drunk within the monastery grounds, most of which we can blame on the ridiculously delicious Orval Vert. It’s draft Orval, lighter in alcohol, softer in texture, richer in malt, more bitter, more aromatically hopped, and no brettanomyces. A remarkable beer drunk in a remarkable place. 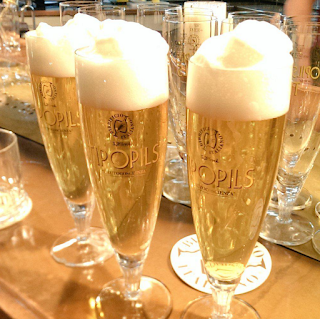 I went to Birrificio Italiano in March specifically to drink fresh Tipopils. It’s long been a favourite beer of mine but to have glasses of bright gold beer with a billowing cloud-like foam was just unbeatable – I love the beer’s bright hop aroma, the challenging dry bitterness (the beer was inspired by Jever plus the addition of a dry hop) and the elegant depth. It’s a special beer.

My dad and I, whilst on a west coast US road trip, drove a 400-mile round-trip to have lunch at Firestone Walker (I drove there and he got the unfortunate job of having to drive us back, while I passed out in the passenger seat…). All the beers were excellent, especially Pivo Pils (ostensibly a copy of Tipopils) but Hammersmith IPA was the one which really stood out to me. A burstingly fresh IPA that I had in a flight to begin and then ordered a pint (hence falling asleep on the journey home…). 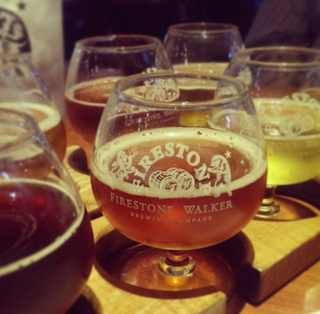 On the same road trip: the best thing I smelt in beer this year – and probably any other year past or future – was the hop store at Sierra Nevada. Imagine bales of green leafy hops stacked up like enormous lego bricks all smelling like citrus and forests and tropical fruit. Sierra Nevada Pale Ale in the taproom, served at draft-strength and bottle-strength, was way beyond my already-high expectations for it. I preferred the draft-strength for the way the aroma was like a tiny distillation of their hop room. A beer pilgrimage worth taking.

I love Social Kitchen and Brewery in San Francisco. It’s underrated but really shouldn’t be for how all the beers have a stunning elegance and clean, precise quality to them while still having huge amounts of flavour. Mr Kite’s Pale Ale won gold at GABF a few weeks before I visited and it’s the best English-style Pale Ale I’ve ever tasted. Toasty malts give depth but no weight then the hops are peachy and grassy and subtly spicy in the best of ways. 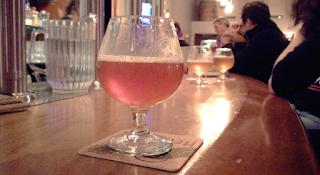 Who knew that the best dark beer I’d drink in 2015 would be brewed in Seoul? Magpie Brewing’s Porter was a perfect glass of beer. Smooth with chocolatey malts, dry yet a little sweet with toast and milky caramel, a long finish but just the kind of fullness of flavour that marks a great Porter from a good one. 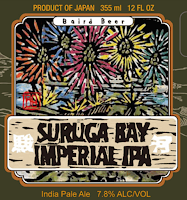 Tokyo was a crazy, amazing place. I wanted to go to find a unique beer culture and apart from small glasses of lager in izakayas with grilled skewers to snack on, I didn’t see it – instead it’s very US-inspired. Baird’s Suruga Bay DIPA was the best thing I drank there. Loads of tangy, citrusy, peachy hop aroma and an easy-going body of malt for a strong beer. I did also really love icy-cold glasses of Asahi in the izakayas. Dry, clean, bitterly refreshing and often poured with a whip of thick white foam.

We wanted to go on a beery boys’ trip, somewhere cheap, easy to get to, with decent beer and something different. We narrowed it down to Vilnius and I’m so glad it did. The farmhouse beers are unlike anything I’ve drunk before (kind of chubby, estery, sometimes buttery, sometimes a little farmy) and there’s a big variety to the brewing there that I really didn’t expect. It wasn’t all deliciously refreshing but it was all fascinating to drink – and it was a whole type of brewing and beer culture that I hadn’t heard of before 2015. 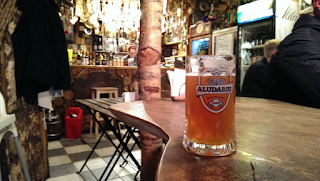 I drank a few pints of Faction Pale Ale this year and it’s a perfect example of the new style of tropical fruit juice hoppy beers that are coming out of the US. I really wish I could drink this beer – or something similar – in the UK.

A stein of Augustiner Edelstoff, served from large wooden barrels, in the Munich sun with Emma was a personal and beer highlight – it’s a favourite lager, so smooth and soft, and I drank it in the sunny Augustiner beer garden. I had this before and after running a half marathon in Tegernsee, south of Munich, where I drank Tegernsee Hell, another glorious lager. And this seems like a pretty good picture to end the year with. 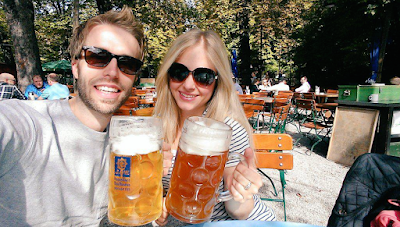