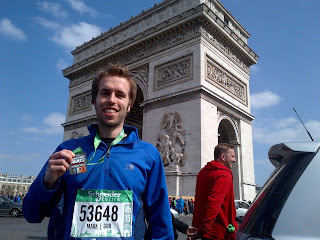 If I ever taste anything more remarkable than the three pieces of fresh orange and the bottle of Vittel that I had at 40km of the Paris marathon then I will have tasted perfection.

I was fine until 32km into the race. Better than fine, in fact; I only had to complete the final 10km in 60 minutes to break four hours. I was enjoying it, I was feeling fit, I was running well and the training niggles weren’t niggling. Then at 34km my body decided, almost in an instant, that it’d had enough. It just broke down. Every step was agony, both in my legs and my head. My mind went from ‘brilliant, there’s only 10km left, I can smash this!’ to ‘holy shit there’s still 8km to go and that’s gonna take me 45 minutes... HOW CAN I HANDLE ANOTHER 45 MINUTES OF THIS HELL?!’ Running the last 8km was the hardest thing I’ve ever done.

But those few quarters of juicy orange, a desperate attempt to get some sweetness and liquid into my dehydrated body, were the most wonderful things I’ve ever eaten. I almost gave up the race to devote myself to eating the whole glorious box of fruit, but somehow they energised me enough to lift one leg, then the next.

In the end I crossed the line in 4:09:09. Considering I didn’t run for a three week block in February and March, plus had a week in Germany which definitely didn’t help the fitness levels, and the longest training run I’d done was 16.5 miles, I’m very pleased with that time.

And the immediate relief of it being over swelled into huge emotion at achieving something for myself and for the hospital who saved my nephew and it left me weirdly euphoric, in a daze of stumbling agony and joyous happiness.

I was going to run the marathon for fun but then things changed and I decided to raise money for Evelina Children’s Hospital. I raised over £800 in a week and that was incredibly motivating; you can read why I chose to raise for that charity here.