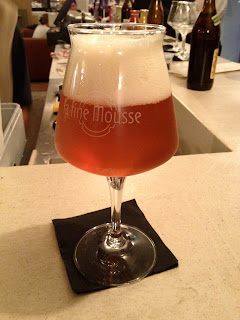 Is there great beer in Paris or just £10 pints of Pelforth? 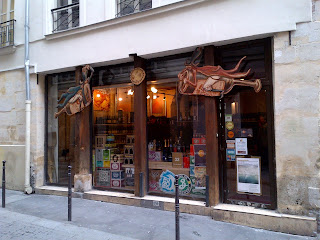 Matt and I started in Cave à Bulles the day before the Paris marathon (so we didn’t drink anything). I hoped to find a few interesting French beers but I didn’t expect to see this many. Wow. What a shop and what a range of beers. From blondes to brunes to bière de gardes and tripels to pale ales, IPAs, Double IPAs and imperial stouts, they had beers of all styles made by French breweries. It took about an hour to choose the bottles I wanted because there were so many which I wanted. This is a brilliant beer shop. 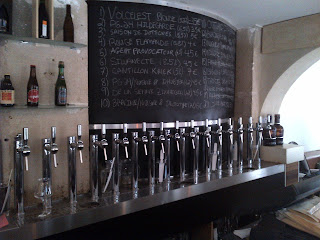 After finishing the run we went straight to La Fine Mousse. A beer bar that reminded me of Mikkeller in Copenhagen, it had a large chalkboard of beers and a long line of unmarked taps – stylish and modern. With 12 of the 20 taps pouring French beer, that’s what we drank (though the imports were definitely interesting!). Ninkasi Blanche had good body and spice plus a little coconut cheesecake; Page 24 Reserve Hildegarde Blonde was full of bold (Noble?) orangey hop; Outland’s IPA was bursting with floral and citrus and very nice; Agent Provocateur by Craig Allen had an elegant hop flavour with loads of fruitiness; Brasserie du Pays Flamand Super Nova was a great DIPA, all piney and resinous; and Silvanecte from Brasserie St Rieul was a wonderful tripel, balanced and rich and loaded with hops. Not cheap at around €4.50 for 250ml (in Teku glasses), but compare that to €10 pints of standard lager and it looks a lot better. It’s a very cool bar and somewhere I’d love to be able to drink regularly.

Before the Eurostar home I had time for one more stop, so went north to Le Super Coin. A small bar with good music, a few beers on tap and many more in the fridges, it meant I could try a few of the bottles I wish I’d picked up in Cave à Bulles. The first was Brasserie de Mont Saleve’s Sorachi Ace Bitter. A 2.5% ABV beer that’s super pale, massively bitter and exotically aromatic from the unusual hop – it’s very good. Then Volcelest Blonde by Brasserie de La Vallée de Chevreuse which was one of my favourite beers of the trip: classic blonde just better with some soft tropical fruit, sharp bitterness and great body, it’s elegant yet exciting.

I had a few other recommendations which I couldn’t get to, including BrewBerry which in my head is a middle point between Cave à Bulles, La Fine Mousse and Le Super Coin.

My expectations were smashed in Paris. The beers we drank were all excellent and all had a distinct taste to them, something absolutely French, a kind of botanic, bracing bitterness similar to highly-hopped Belgian beers. It’s perhaps not the first choice for a beer trip but if you’re in Paris then there’s definitely great places to drink great French beer.

The top image is from here - it's way better than anything my phone will take. It also shows a lot more images from inside La fine Mousse, which is a lovely-looking place.
Posted by Mark Dredge