Cask and Craft: Time to stop the fight 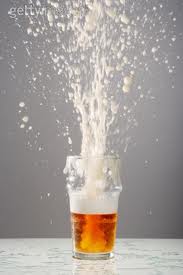 I’m so utterly, infuriatingly frustrated with the whole cask and craft discussion in the UK right now that it makes me wish I wrote about wine because it’s frankly embarrassing. Why is there this in-fighting in what should be a close industry? Somehow the discussion has evolved into this thing which is a monster of misunderstanding, which like a game of Chinese whispers is turning into a bastard of untruths and assumptions.

The thing which annoys me the most is creating a distinction between a cask beer (I'm using 'cask' instead of real ale throughout because it's the actual container which seems to be causing the issues here) and a craft beer. Some people seem to think that if it’s in a keg then it’s craft and if it’s on cask then it isn’t. That’s just bullshit (where did that even come from?!) There are some breweries who are frequently mentioned – Thornbridge, Magic Rock, etc – because they make both cask and keg beer. Does that mean cask Jaipur is not craft yet the kegged version is? Where does the bottle then fit? A definition of ‘craft’ based dispense is very, very wrong and totally unnecessary.

There are nanobreweries, microbreweries, regional breweries, national breweries... But that’s largely irrelevant, too, because size doesn’t define craft, especially not at the scale of these UK breweries. Likewise a definition based on style is just stupid. Everything I’ve seen on this recently has mentioned highly hopped beers as if that’s the only type of ‘craft’ brew you’ll find. That’s wrong, too. Craft is just a word that’s been sucked into British beer from America and then been applied poorly because no one seems to know what to do with it, which is a genuine problem, but just because the most visible American craft beers tend to be IPAs and they tend to be kegged doesn’t mean that it’s the only craft beer or that we can use that to define craft in Britain.

Craft beer is just a name. An idea that beer is made by hand from natural ingredients and that there’s more to beer than mass-produced multinational lagers. There are over 1,000 breweries in the UK right now and over 95% of them would probably count as craft, I reckon. And over 95% of those probably only make cask beer. All of them just make beer. Let’s not get hung up on a name.
This piece in the Wandsworth Beer Festival programme typifies the contemptuous crap that is being spouted about beer at the moment and it’s completely wrong and missing the point. I want to rip it apart but it’s just some unbelievably misleading that I don’t know where to even begin with it. It’s like a scared kind of misinformed prejudice, based on dated ideas, which jumps to astonishing conclusions based on assiduous assumptions. And then other people believe that shit.

The simple truth – and the important thing to think about – is that kegged beer made by small breweries isn’t in competition with cask ales; it’s a bonus to sit beside cask on the bar. Pubs aren’t removing cask lines to put in keg lines, they are kicking out the mass-made lagers and to give more kegged choices. And kegged beers aren’t there to dumb down the beer market, they are trying to ignite it with new experiences, new brews (while we’re here: no small brewery pasteurises their beer, few filter it, most use the best ingredients they can find and give the beer a lot longer in tank than their hurried cask counterparts).

Why can’t people see this? Why is there a negative attitude towards it? And why the hell does it matter? It’s about choice and when we get to the bar we can make our own choices; some people will only look at the casks, some will only look at the kegs, others will scan the whole range. Excellent British kegged beer (not flipping ‘Craft Keg’, what a horrific term) is adding extra depth to what we can buy in the bar. That’s a great thing.

I’m writing this as someone who has just written a book with craft beer in the title. I didn’t choose the beers for any other reason than they are interesting and delicious. Craft beer is just a name; I don’t think it’s an actual definable thing and certainly not in any meaningful way. It’s like a farmer’s market. How do you define that when every one you go to is different? You don’t define it but you know what you get when you visit one; some are better than others, some are more commercial, some are more rustic. I simply don’t think we need to define craft but I do think we need to kill the misunderstanding between craft and cask because we need to appreciate that they belong side by side and that one isn’t trying to replace or undermine the other.

And I genuinely think that spreading false ideas about ‘craft’ is leaving a disjointed and fraying British beer industry which seems to be fighting over a silly detail instead of getting together to support the best tasting British beer.

It’s time to take a modern look at beer, an all-encompassing, open-eyed and open-minded look at beer. Craft beer isn’t just IPA. It’s not just bloody fizzy beer. And cask beer isn’t all boring and brown and flat and warm. Why is there ongoing tension between the two? And how the hell can we get rid of it?