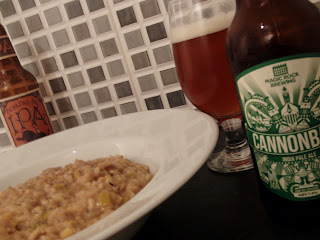 American IPA is brilliant with strong cheddar. Risottos are awesome – rich, savoury, filling. Imagine how good a risotto would be if it was made with IPA and cheddar, plus parmesan and a delicious depth of sweet onion, leek and garlic. I had to find out.

The beer has to be chosen carefully because if it’s too bitter then it ruins everything and no one wants a bitter risotto. The safety net was the butter and cheese which wrap themselves around any bitterness and smother it. I went with Odell’s IPA because there’s loads of juicy fruit (mandarin and mango), a background sweetness and IBUs which don’t overpower (it’s also one of my favourite beers). And it’s delicious with cheddar and chunks of parmesan.

This is a classic risotto recipe, like this one. For one person, I used a large white onion, a medium-sized leek, sliced into half-moons, and a big fat clove of garlic, all softened in butter and a little oil with a sprinkle of sugar and fresh thyme alongside the salt and pepper. The beer went in during the middle of the cooking; I didn’t add at the beginning like you would with wine because I didn’t want to highlight the hop bitterness, instead I poured in about 100ml after three ladles of stock had been added. At the end, a mix of cheddar and parmesan went in.

An IPA on the side and it was delicious. The beer adds a lot in the cooking, with the hint of hop poking the flavours in the onion and cheese in new directions, which is fantastic. The fruit flavour that comes from the beer and cheeses work so well together while the sweetness in the onion, leek and garlic complete the whole thing. Damn good.

Now it’s got me thinking about other beery risottos...

The only trouble with a risotto is that I always go into it thinking that it’ll be wonderfully soothing and relaxing to make as I stand there and gently stir the rice and watch as it softens and soaks up all the stock, but the reality is that it always stresses me out – the constant stirring frustrates, the adding of stock annoys me, there’s the hope that the next taste won’t be crunchy (which always takes longer than expected) and I just end up getting hot from the hob and angry or drunk while I wait.