The Session #52: Beer Collectibles and Breweriana

About three years ago I started collecting bottle caps. Every unique cap from a bottle I’d drunk. There were red ones and yellow ones, black and silver and blue; most had brewery logos, some had other designs, each had something different. Caps became scalps, a leftover from the bottle I’d had. They were a collage of what I’d had to drink: a green and gold Mythos from Greece, a shining reminder of the shining sunshine; my first Westvleteren saved like a valuable old coin; a Fuller’s Vintage I’d kept for a couple of years complete with the headband of label; a Stone Ruination and the grizzly gargoyle. Whatever it was, I’d take the cap off the bottle and add it to the others.
It started as a small pile which grew to a big pile which then moved to a plastic pint glass which then overflowed into another small pile which became a balancing act of a big pile. To keep the unwieldy collection under control I would need to take regular audits, spreading the caps out, keeping the good ones and dropping any duplicates and boring ones – the collection became stronger, better. And so on until my little stash of bottle caps became an ever-evolving snapshot of my drinking. I always enjoyed adding a new cap to the pile, hearing that plastic-softened chink of metal on metal. I’m sure that I had big plans to do something with the caps. One day.
When I moved in with Lauren, to share a flat with her and her OCD tidiness, the cap collection didn’t make the journey, left behind like forgotten toys (they might still be in my parents’ loft...). I decided to start fresh on a new collection so it was a physical memory box in the form of ridged bottle tops. This new collection didn’t last long...
“What are you doing with that bottle cap?” Lauren would say.
“Just going to put it on the top shelf and keep it.” I reply, politely smiling.
“Why?” She asks.
“It’s a nice cap, look.” I show her it. It’s got a nice logo on it.
“No, it’s not. You aren’t keeping it.”
“Oh, just this one, it’s a really cool one.”
“No. What are you going to do with it?”
“I don’t know. Just look at it. I like keeping them. Maybe I could make a picture from all the bottle caps I save.”
“NO!”
Knowing better than to argue over a bottle cap, I threw it towards the bin, probably missing. Unable to break the simple habit of keeping the caps, I briefly attempted to keep a secret stash on the highest shelf where she couldn’t see. These were just the rarest ones I had, the ones I couldn’t possibly bare to throw away (“But it’s from Russian River!”).
I just checked my stash. Only two remain, hidden under the huge wedge that is Don Quixote (great book), missed by Lauren. Two caps does not a bottle cap collection make, as the very famous saying goes. I just threw them away.
I guess I don’t keep bottle caps any more. 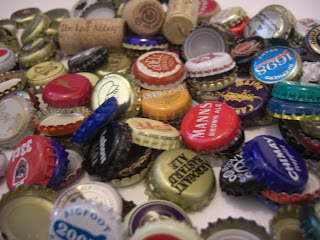 I have, however, started keeping some of my favourite bottles. “We can use them as vases!” I said, trying to distract from the fact that I’m just keeping old, empty bottles of beer. It’s working, for now... although I’ve only got three (I’m being very, very selective). I used to have a small bottle of BrewDog Zephyr but I guess that went away with the caps. There was also a Petite Orval but that’s gone too. Lauren's better at over-tidying then I am at hoarding crap.
This month’s Session is hosted by All Over Beer.
Posted by Mark Dredge