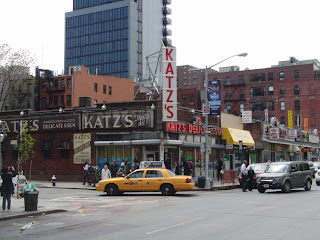 New York wasn’t just about getting drunk and watching baseball. We were also there to eat as much as possible.

Burgers were the early focus and Shake Shack, 5Napkin and Burger Joint were the top three targets.


Shake Shack came at the baseball, a soft and cakey bun and a succulent slab of meat. The experience of having it with a great beer in a ballpark made it even better.
5Napkin came at the end of a long drinking day as we hustled to order before they shut. The fattest hunk of beef, a round and glazed bun, basket of fries and a bottle of Racer 5 (Matt had Racer 5 anyway; I made the mistake of not ordering it). I almost fell asleep on the pillowy bun, the lull of a lupulin haze and the hit of jet lag taking their toll, but it was still brilliant.
Then there’s Burger Joint. What a place. It’s one of those used-to-be-secret hangouts, hidden inside the plush hotel lobby of Le Parker Meridien (you can tell how fancy it is by the use of ‘Le’ instead of ‘The’). We swish through the revolving doors to see nothing but a reception desk and a sweeping red curtain, but look a little closer and there’s a small, dark alley between the desk and curtain and inside that alley is a sign: an illuminated burger and an arrow. That’s all you get. 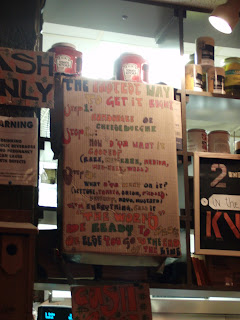 Inside it’s small, busy and warm, with walls lined with photos. The servers are squeezed into a small space, running as fast as they can when you can only jump forward or back two steps. Ordering is easy: do you want cheese or not; how do you want it cooked; do you want onions, gherkins and sauce (go Fully Loaded); do you want fries, soft drink or a beer.


The burger is excellent – no frills bun, oozing cheese, a stack of tomato and onions struggling to stay in place, and a great piece of meat. The Sam Adams Lager we have with it is the best we’ve ever tasted it.
Burgered out, we moved on to pizza. Just down the street from Mugs Ale House in Brooklyn is a by-the-slice place cutting floppy, hot triangles from huge rounds of pizza. It was so good I had to order another. The top of our pizza hit-list was Artichoke Pizza but when we were researching it the website didn’t work so we gave up hope and forgot about it, only reminded of its existence when we walked past one on the way to Chelsea Piers. Still stuffering from a massive lunch we shared a slice but probably could’ve forced ourselves to eat a whole pizza it was so good – we went for the eponymous choice, a creamy white-sauce base topped with artichoke and cheese. It was amazing (and the first ‘white’ pizza I’ve had – I’ll definitely be having more). 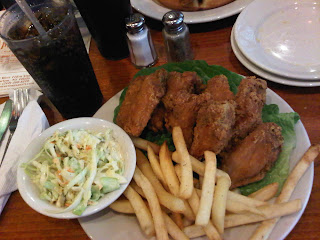 Matt wanted chicken and waffles (no idea why – the idea of fried chicken served with waffles and maple syrup is beyond me but I think he wanted some culture or something) so we headed to Amy Ruth’s in Harlem for some soul food. I ordered Nandos-style: chicken wings, fries, coleslaw. It was the best chicken and coleslaw I’ve ever had. Like normal fried chicken and coleslaw but about 100-times better - highly recommended.
And then there’s Katz’s Deli. An NYC food attraction in its own right, complete with a queue to get in, door men and tickets. Most famous for selling ridiculously big sandwiches, it was also where the ‘I’ll have what she’s having’ scene from ‘When Harry Met Sally’ was filmed.
Walking in you are given a ticket as you hit a humming wall of noise and excitement. This place is like no other deli. It’s huge, it’s completely packed with people eating and there’s a five-deep queue to get served at each of the six serving points where enormous men wearing blood- and meat-juice-stained aprons wield giant knives and slice massive hunks of meat before organising (stacking – the meat comes about two inches thick) them on top of impossibly thin (comparatively speaking, anyway) pieces of bread. 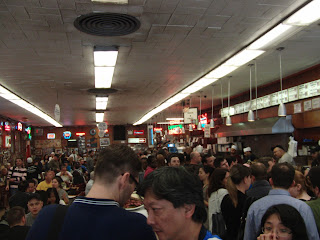 The hunger builds as you see the people in front of you turn excitedly with their skyscraper sandwiches as they look to seat and eat. And this place is all about the sandwiches. They also serve a few Jewish classics, and then sodas, fries and sides from a second serving area a little beyond the unending line of sandwich making, but it’s mostly about the meat and bread. 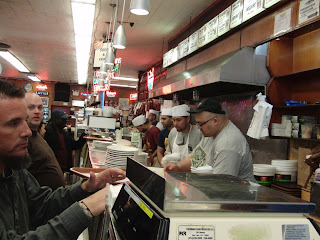 We order a pastrami on rye and a Reuben and it’s made fresh in front of you with the maker taking boulders of beef and slicing a few pieces off for you to try while they work. The meat is just about the best we’ve ever tasted – impossibly tender and full of flavour. When the sandwich is ready it’s passed over with a pile of pickles on the side and we turn excitedly and begin the hunt for somewhere to sit.
It’s really busy so spare seats are a premium, even if this place can fit around 300 people in, and you have to fight through a queue of people just to get into the dining ‘space’ (space isn’t the right word as there is none of it...). We find a spot, sit and prepare ourselves for the meat mountain. The Reuben is corned beef (not like the stuff in tins), Russian dressing and cheese, somehow held together by the bread which is really just a form of transport for the meat. The pastrami is thin slivers of fragrant pink meat served with lots of mustard and piled between rye bread.


The sandwiches are insane. They are so big, so juicy, so meaty and so good. It’s hard to not be impressed just by the volume of food you are getting, but it tastes great too. The pickles on the side provide a bolt of sharpness to cut the richness while the fries (we couldn’t not order them once we’d seen how good they looked!) are chipped perfection.
Katz’ Deli is the Globe of sandwich-making; food theatre from beginning to end, with excitement (look at that sandwich!), fear (how am I going to eat this sandwich?!), suspense (can I finish this sandwich?!), a chase for seats, the gut-wrenching choice of what to order, the sounds and sights of the people in the dining audience. It’s an amazing experience.
We ate and drank far too much in New York and it was brilliant.
Posted by Mark Dredge