It’s taken too long to get this posted but it’s finally here. The dinner which me, Zak Avery and Pete Brown held at Musa, in Aberdeen, was a success with all six food and beer pairings working wonderfully, brilliantly well. Therefore they are all worthy of FABPOW! status.
To get to the pairings took a few weeks. It started by us choosing two beers each, any two beers as long as they were bottles which BrewDog could get in the UK. Then many emails bounced between us and Dave More, the excellent head chef at Musa, as we tried to come up with the best possible courses and pairings, tweaking this little detail or that. Eventually we got there. 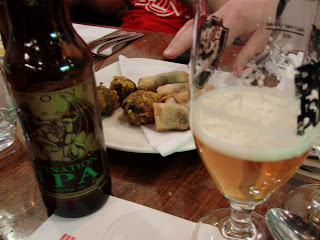 Stone Ruination IPA with haggis spring rolls and black pudding bon bons (my choice). This beer is a favourite of mine, one which blew my mind with the awesome power of hops when I first had it a few years ago. At 100 IBUs it’s not exactly a light beer to start with, but who cares, it worked superbly with the richness and spices in the dishes with the bon bons being like onion bhajis with a blood sausage twist – as beer snacks go this one is a winner. 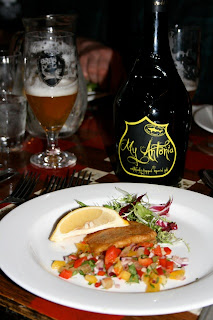 Dogfish Head/Birra del Borgo My Antonia with tortillitas de camarones (Zak’s choice). A great beer hopped with Saaz, Warrior and Simcoe, giving lemon pith and a floral, biting bitterness above the smooth body. It cut through the spicy prawn pancake and salsa with ease, providing that slice of carbonation and burst of palate-livening hops. 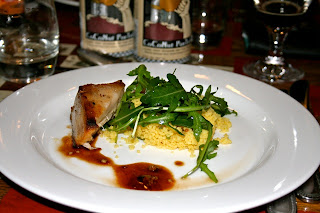 Maui Coconut Porter with belly pork marinated in Punk, garlic, ginger, chilli and more for three days, served with couscous and a rich jus (my choice). The smooth, chocolatey beer has an uplift of coconut and fruity-floral hops which married so well with the spice in the dish (I love dark beer like this with spice) and the deliciously fatty, roasted meat, while the nutty match of couscous and coconut was a bridge to hold it all together. 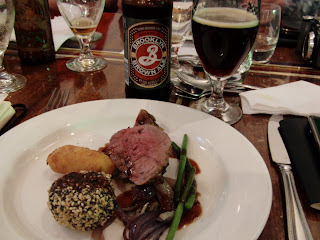 Brooklyn Brown Ale with chimmichuri lamb and goats’ cheese croquettes (Pete’s choice). Another great match with the roasty beer working so well with the lamb, spices and the warm cheese, with the earthy English hop bitterness cutting through the whole lot. If anything it needed a touch more body to carry off the punch of cheese, but still a really good pairing.
Then came the fun course: Dark Horizon ice cream shooters (Zak’s choice). The beer is big and rich, 15% of dark chocolate, coffee and dried fruit, and that topped with vanilla ice cream was just incredibly good, rich and thick and playful.
Cheeses to finish with a Fuller’s Vintage 2010 (Pete’s choice). Valdeon and Brie de Meaux, served lightly grilled on thin toasts, which was a twist on serving the course but it added a little gooey warmth to the big-flavoured cheeses which were served with a couple of chutneys. The beer stood up to it all and rounded off the whole meal elegantly in the face of some tongue-smashing cheeses.
It was a great dinner to see how different beers can compliment different flavours and textures in food. It was also good fun and each one was worthy of a FABPOW! Musa’s a cool restaurant too, with a couple of BrewDog beers on tap and a decent fridge filled with bottles. If you are going to the BrewDog bar in Aberdeen then that’s the place to line your stomach!
---
Thanks to Johanna Basford who took the good photos (I took the Ruination and the Brooklyn and all of us obviously got too carried away with the beer to bother with taking photos of the last two courses).
Posted by Mark Dredge