I video blogged! Below is the written version which doesn’t show me doing the eating and drinking and is hopefully more coherent.
Jambalaya: a jumble of French, Spanish and Creole in the southern states of America; a jumble of meat, vegetables and fish; a jumble of rich and spicy, smoky, meaty and savoury with bursts of sweet prawns or tomatoes. It’s a paella or pilau which has been uprooted and fallen down near the Gulf of Mexico.
I used Jamie Oliver’s recipe and it was great. If recipe reading is too strenuous then do this, with some stirring in between: chicken, smoked sausage; onion, pepper, celery; garlic, chilli (I used scotch bonnet), bay leaves, thyme; stock; rice; prawns.
It’s a great dish for a beer, with tastes and textures calling out for the cooling cut of carbonation, and so with it I wanted to try a few different ones, to try and see what worked best and why. I like dark beers with spicy food as the chocolatey, roasty depth acts like a Scoville sponge, rounding out flavours, while there’s a smoky/savoury bridge in them which can bring flavours together. Many people like pale ales with spices, something I’m more wary of because hops and chilli tend to fight rather than play and like two naughty kids when you put them together they get naughtier and noisier rather than quieter and calmer. I also couldn’t resist trying it with a lager. If someone in a Southern US state was going to have a beer with their dinner then chances are they’d have something like Bud. Jaipur was there because I was drinking it while cooking dinner. 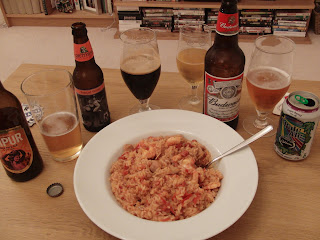 Smuttynose Robust Porter. Chocolate, smoke, a savoury depth and a long-lasting roasty finish which develops as it warms. With the dinner it worked really well to begin, being a cooling sensation against the fiery scotch bonnets, but when the long finish came out from its six degree slumber it rubbed against the spice and intensified it - imagine a cup of coffee when all you really want is a glass of lemonade.
Caldera Pale Ale. What a nice beer. A noseful of Cascades, smooth and crisp without the bitter hit I was expecting but enough to make you go straight back for more, making it very drinkable. The underlying sweetness in it made it work really well with the richly savoury dish, slicing through the chorizo smokiness, but the hops at the end, rather than rounding it off, add a little jagged edge. Still a nice match up though and something I’d have again.
Thornbridge Jaipur. A glass of Centennials, fruity, floral, a spectrum of oranges and a long-lasting bitterness. It’s the first bottle of Jaipur I’ve had in ages and I enjoyed it. However, it didn’t like the jambalaya. The bitterness in there became harsh with the spices, earthy and tangy.
Budweiser. I’ve got no problems drinking Budweiser and as a beer it fascinates me, particularly its history. It’s very pale, doesn’t bellow out a huge aroma (most people drink it straight from the bottle so forget late hops), but has that classic bite of apple. It’s clean and crisp, cold from the fridge it’s uncomplicated and easy to drink: it is what it is. With jambalaya... it was perfect. I wanted it to just be ok, but it was spot on. With the spice a little lemon character came through which cut through everything, an unexpected burst of sweetness was enough to fight off the saltiness and it cooled everything down and balanced it out, making it the beer I wanted to drink more of.
The jambalaya was delicious. It’s also a dish which throws out different challenges to finding a good beer to go with it – chilli heat, smoke, delicate prawns, rich rice, a heavy and sticky texture, tomato. I tried all the beers over and over (until at the end of dinner I couldn’t move for an hour) and Bud was the one I kept going back to: it just worked. It was uncomplicated and improved the flavours in both the food and the beer. Next time I should try it with Dixie, a New Orleans lager for that local flavour. Until then, Budweiser gets FABPOW’d.
Posted by Mark Dredge