Hardknott Night at The Rake 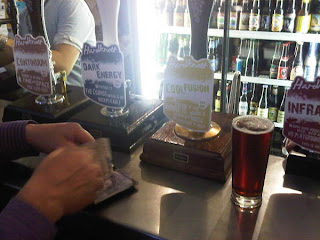 I really liked the Hardknott Aether Blaec but that could’ve easily been a fluke. I know Dave but I didn’t know whether he could really brew or if he just talked (loudly and in depth) a good game. I had to find out for myself…

Thankfully The Rake did the leg work for me (saving a long round-trip to Cumbria for a pint) and arranged Hardknott Night. I arrived to see three beers on the bar, one in the cellar and two in the fridge. I start with Continuum, a 4% pale and hoppy made with Cascades, Centennials and Willamette. Dave wasn’t happy because it didn’t drop and had a slight haze. Haze doesn’t worry me, taste does. It’s good. Really good. A bitterness that won’t scare normal people but will still please the lupulin freaks, a solid body of caramel, a great aroma too. I drank more of this than I can remember...
Next was Cool Fusion. A 4.4% pale ale with fresh ginger and chilli. This was the first beer to run out on the night and it went by 9pm. On a cold day I’d say it needs more ginger and a peppery kick, but in the heat of the sticky London summer the gentle prickle and zing of ginger was incredibly refreshing.
Dark Energy is the Hardknott stout. At 4.9% it’s got a lot going on inside with earthiness, a little smoke, berries and hop fruitiness, chocolate and roast bitterness. As cask stouts go (and many don’t go far, if you ask me) this one was excellent. For me I’d want a little more body but then I like a lot of body in my stouts. As Sid Boggle has pointed out, the Dark Energy is ‘the obvious cousin’ of Aether Blaec and it’s hard to disagree.
Down in the cellar, hidden away, was Infra Red, a 6.2% IPA (I’d say it was an imperial red, not an IPA, but who knows what an IPA is anymore). It certainly was red and it certainly was hoppy, bursting with vibrant and bold C-hops bringing bright bitterness (lingering, not nose-clearing) and a body to carry it throughout. Dave was most pleased with this beer and I can see why. My only comment was that it needed more Amarillos. Dave replied: “It hasn’t got any in it.” “Exactly.” I said.
I didn’t get any Aether Blaec but I had a nip of Granite, the big barley wine. It’s big and has an underlying smokiness, a burnt edge, an earthiness, but no throat-searing booze – it’s something that you could get completely lost in and enjoy every sip. I’ve got a bottle at home which might get another few months before I open it.
So I finally got to try Dave’s beers and I’m glad I did because they were all excellent. I’m pleased for Dave because he’s a great guy and I hope for him and Ann that Hardknott succeed – they certainly deserve to.
It seems I wasn’t the only one who wanted to know how Dave’s beers tasted. Halfway through the night I realise I was surrounded by brewers: there’s Dave, John Keeling, Pete Brissenden (formerly of Hopdaemon, now of Hogs Back), Evin O’Riordain and Phil Lowry. When they talk about brewing in technical terms I nod along as if I understand and then ask what hops are in it.
Posted by Mark Dredge