I've decided to try out some video blogging. I have a youtube channel which you can view at www.youtube.com/user/markdredge. While you are there, check out Zak Avery's brilliant channel or click here.

If you’ve seen the video above then you won’t need much of an intro to this dish (this is my first attempt at a video, so be kind! EDIT: I've uploaded a new and improved version with better sound). Whether you want it with the beer or not, that’s up to you, but it’s an amazing match – actually amazing! - and I can’t think of a single other beer which would work with a lemon cheesecake. Even sitting here now this combo still baffles and excites me.

Like I say in the video, it’s difficult to do the beer justice with words. If you are a beer person then it’s one of those beers you need to try. It’s in-your-face awesome, it’s challenging and it’ll make you think about what beer is capable of being. I love it for its complexity. There’s more on the BrewDog website, including their own video and some more food pairing (written by me!), and you can find that here.

This cheesecake is so easy to make and tastes great. It’s perfect for a light finish to a meal, a great summer dessert or even a fancy dinner party – it can do it all with ease. The whisky-spiked sauce is intended for the beer and acts as a stepping stone between the food and drink, linking the flavours in each, but it works perfectly if you don’t serve this beer. 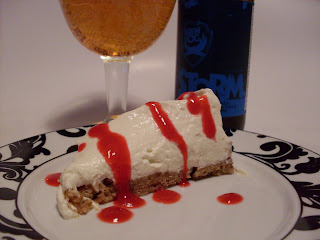 This makes a big cheesecake, easily enough for 8

Butter a loose-bottomed cake/flan tin. Crush the biscuits into a fine dust - I do this by putting them in a sandwich bad and smashing them with a rolling pin (make sure the bag is on top of a kitchen towel or something soft and ensure there is no air in the bag). Then add this to the melted butter and stir through. Push the biscuit mix tightly into the base of the tin and chill.

Mix together the double cream until it is as thick as you can make it before it turns to butter. In a separate bowl mix the cheeses and icing sugar, then add the zest and juice of 1 lemon. Stir it through and add the double cream, folding it in. Give it a taste and add as much of the leftover lemon juice and zest as you like. If you are making this for the Storm then go easy on the lemon or it’ll overpower the beer – it may be a beer full of massive flavours, but it is still only an 8%-er so you need some delicacy.

Once everything is mixed together, layer it on top of the base and chill until you want it.

To make the raspberry sauce just blitz up 200g of fresh raspberries, a tablespoon of icing sugar or honey and 50ml of whisky. Give it a taste, if you want more sweetness then just add some more sugar or honey. Pour it through a sieve to remove the pips and set aside.

Serve this with the Storm which should be just cool. I’d like to suggest another beer to serve with the cheesecake but I really can’t think of another which would work.