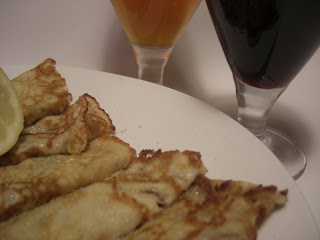 I love pancakes so much that I deprive myself of them for the whole year to be able to enjoy them even more on Pancake Day, which is one of the best days of the year. This year I’m out on Tuesday so it’s a Pancake Sunday.

My pancakes are the thin, lacy ones. Like crepes but better. They fry briefly on one side, picking up a golden tan, then they’re flipped over and tanned on the other, going crispy on the outside and soft and flimsy in the middle. So simple yet so flipping good!

Pancake Day, or Shrove Tuesday, is to do with Lent. It was originally a day to use up luxury foods (milk, butter, eggs) before the 40 days of fasting which begins on Ash Wednesday. Now I don’t follow Lent and I don’t give stuff up but I do strictly follow the golden glories of Pancake Day!

I wanted a new spin on things this year and tried to match a beer to go with them. I considered making American-style blueberry pancakes with maple syrup, I thought about banana and chocolate pancakes and I even toyed with the savoury idea, all of which would be fairly easy pairings. But you know what? I have my pancakes with sugar and lemon. I always have and I always will. So I had to find a beer to go with that.

You need a beer that can balance both the sweet and sour while still letting the buttery pancake through and you need the beer to keep its true flavours and not become flabby and lifeless. Pancakes aren’t designed to be a balance treat, it’s a feast of fun, so I didn’t really know what was going to work best, so I opened a coffee imperial stout and an imperial IPA (figuring that it’d need some beer mega-flavours to work), to see what I got. I also thought about popping the cork on a lambic or gueuze, but wasn’t certain how the acidity in the glass and on the plate would work together. Maybe next year I can try my pancakes with sugar and lambic!

The coffee stout was rich and strong, with roasted bitterness, a woody sweetness and a nice smack of hops to finish it. The beer worked well with the pancakes; not perfect but pretty damn good. It’d be better with blueberry pancakes and maple syrup, to be honest.

The IPA was 9%, it’s got a syrupy sweet malt base and then a dry, scratching finish of earthy, pithy bitterness. It’s got hops but they don’t go all the way to 11, they’re about a 7. This worked great when the pancakes were loaded with sugar and lemon and there was a great balance over the palate of sweet, bitter, sour and savoury. Beware: when there wasn’t so much sweet and sour then the beer blew the doors off the pancakes.

I did discover that the pancakes would work with a softer beer, lower in alcohol and less punchy, so there’s plenty of choice for Tuesday. English IPA or porter would be cool; the Meantime beers, White Shield IPA, Gadd’s Dogbolter porter. A strong ale like Fuller’s Golden Pride, or something like Sierra Nevada’s Pale Ale. Great Divide’s Yeti Imperial Stout would blend the coffee stout and the IPA and that’d make for an interesting combo. And some barrel aged beers with their buttery, oaky sweetness; Innis & Gunn Original or even a leftfield choice of BrewDog’s Storm (see the Lemon Cheesecake for why it’d work a treat).

Mix the flour, salt, eggs and milk into a batter, add a pinch of sugar and a splash of oil, stir and leave it to chill out in the fridge. If you want, you could replace half the milk in the recipe with beer, but go for a mild or something with little hop bitterness.

To cook, heat a large pan so that it’s hot hot hot and melt a small knob of butter with a trickle of oil and put just enough batter in to cover in a thin layer. Fry until golden and crisp on one side, flip over and cook for another minute or so. Slide onto a plate and lavish in as much or little lemon and sugar as you like. I roll mine up here, but you can have them flat. Lovely stuff.

Now I’ve got two half-drunk bottles of imperial beer to see me through the night. Oh the hardships of searching for cool beer and food matches (I just tried a cheeky black and tan too and that was blinding!).