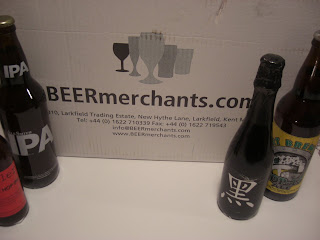 This follows on from last week’s post about The Best Supermarket Beer and asks: Where do you buy your beer from?

I like to drink new beers; ones I’ve not had before. There’ll also be a few staples in the house, picked up from wherever, but it’s the new beers that I’m talking about here.

I think I’ve pretty much exhausted the supermarket selections now and I tend to only buy from there if I want it for a specific occasion, food pairing or if I see something new. There are some brilliant beers available in the supermarkets, I’ve just worked my way through them so want more choice.

I go to Utobeer in Borough Market a lot and there’s a decent selection in my favourite farm shop, Macknade Fine Foods, including plenty of local beers and the range of Sam Smith’s.

I’ve bought my last few hauls online. Beermerchants (run by Phil who has a cool blog here) have a load of European beers and also an ever expanding selection of American beers (that’s what I’m after!), some which can’t be bought anywhere else yet, from Port Brewing, Lost Abbey and AleSmith. I put in a big order a few weeks ago and most of the beers I bought I’d never even seen anywhere else before (I actually only live 15 minutes drive from the depot so maybe I’ll pop over sometime!).

I’ve ordered from Beers of Europe recently too. They’ve got an excellent selection of beers from all over the world, including lots of British and American bottles. My order arrived within 48 hours (in spite of the snow). They also have Europe’s largest beer shop.

What about the others? Zak Avery runs a beer shop in Leeds. Beer Ritz are an online beer shop and they have a large selection of bottled beers from around the world. There’s RealAle.com, which is based in Twickenham (while I was at Royal Holloway University a few miles away we used to venture over to pick up our beers); they have expanded their selection recently to take in more American and world beers, and they sell online. There’s also Beer Ventures and Only Fine Beer (I don't know much about these two). Some breweries sell direct too, which I like, but there aren’t enough doing this.

Who else? Who do you recommend? Where do you buy your beer from? I need to know where to go to next!
Posted by Mark Dredge