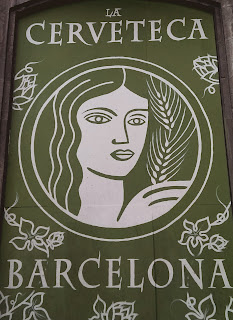 It may have been planned as a non-beery weekend away for some October sunshine, but you can’t keep a beer geek away from local craft beers, especially when it’s a major city in a country that isn’t yet known for its brewing... So what’s Barcelona like for good beer and where should you go to find the best? 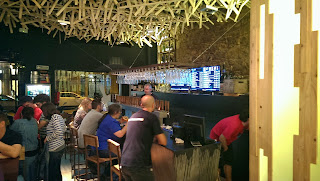 BierCaB
This was in the process of opening when I was there (early October 2013) and it was only a tweet from a local that sent me there, but I’m very glad we went. With 30 taps, lots of Spanish beers, plus really great imported beers including rarely-seen American stuff, this is the place to go for beer in Barcelona (and a world-class bar wherever you are in the world). It’s very smart and modern, the beer list is on big TV screens and there’s very good food. Naparbier’s US-hopped unfiltered lager was so good I ordered their Back in Black, a chocolate orange of a Black IPA, and that was so good that I ordered their ZZ+ Amber which was also very good. BierCaB is an essential Barca beer stop. 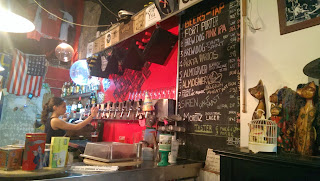 CatBar
This place is fun. Small and filled with mis-matched furniture, there’s jazz in the background and drawings of cats all over the walls. There are nine beers on tap (six were Spanish when I went) and they do flights if you want to sample some things before you get a pint. They have a good fridge of Spanish bottles and the food menu is vegan – the burgers are good. A porter from Fort was tasty, as was a bottle of Ausesken Cat IPA, which was recommended by the bar staff (though it was quite dark in colour – a lot of IPAs seem to be brown... is this Iberian Pale Ale, perhaps). This is a must-visit beer bar. 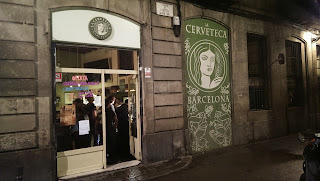 La Cerveteca
A short walk from CatBar, this is a bottle shop and cool corner bar that feels like an old English pub, especially as they had a beer on cask and a humming chatty atmosphere. A list of import beers were on tap with the only Spanish option being on the handpull. The cask was from Ales Agullons and was soft, dry, fragrantly hoppy and bitter – it was superb. The bottle range has a lot of Spanish choice. It’s too close to CatBar to not do both. 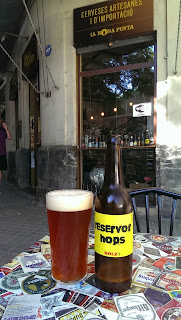 La Bona Pinta
A few streets away from the La Sagrada Familia is this little bottle shop which doesn’t look much from the street corner but it opens into a bar with seating inside. BrewDog, Siren, and some other imports were on tap, while the fridges and shelves were loaded with Spanish beers. Go here to get bottles, but stay for a glass while you’re there. 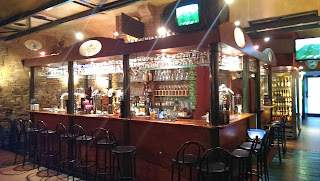 Cervesera Artesana
A brewpub in town, not far from La Sagrada Familia. Walking in it’s like an old sports bar, only there’s brewing kits in the back. It has lots of classic bottles plus five of their own beers on tap. Obviously I ordered all of them, though slightly regretted it as they all had some unusual flavours from fermentation, though they were definitely drinkable. Their Imperial Stout was good and worth going for (if a little boozy for 25C weather) – dark chocolate and coffee, plus their associated acidity, some fruitiness, lots of cocoa, liquorice and vanilla, but more weird fermentation flavours. Go if you’re nearby. 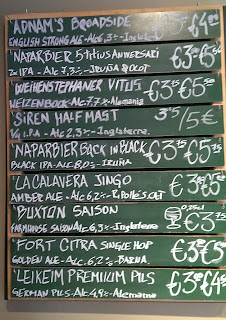 Ale & Hop
I loved this place. A cool, long bar, with stool seating and then tables in the back. A good bottle fridge and food menu – we stopped for brunch on Sunday and the food was superb. The beers were some of the best, too. Fort’s Citra Golden Ale was perfect: fresh and fruity, juicy and delicious. They had a couple of great Naparbier beers on, plus imports. Definitely go here for food and for beer. 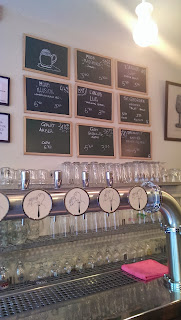 Homosibaris
Off a small placa, this is a smart bar and bottle shop with eight taps mixing local and imports. Cosy seating in the back, interesting art on the walls, some snacks, and a good atmosphere. There’s a brewery attached but there were no house beers on when I went. 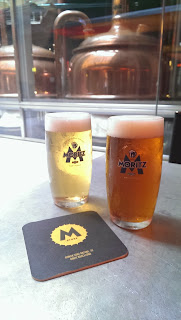 Fabrica Moritz
This is a decent-sized brewery in the middle of the city. It’s smart and modern, you can see the tanks, you can order some tapas, and they serve two types of beer: an unfiltered lager and an amber lager. Both are good, very clean, simple, yet quenching in the warm weather. I liked this place a lot and if you want a good, refreshing lager then go here.

Barcelona is an amazing city and I love it. Getting lost in winding old streets, seeing the beautiful buildings and being by the beach is a great mix. Big beer dominates, which is evident as the Estrella brewery is pretty much the first thing you see when you leave the airport, but there is a growing number of small breweries.

And what I found was that they are making a wide range of different styles from straight-up pilsner, to American-style pale ales and IPAs, lots of stouts, and even some wild ales and sour beers. Many either seemed a bit sweet or aggressively bitter but the best beers I tasted were equal to the best beers brewed anywhere in the world, which is great (Fort, Agullons and Naparbier were my favourites, though there are no doubt others making really good beers which I didn’t get to try). One caveat is that for every great beer I had, I also had a poor one which had some kind of brewing issue (most often acetaldehyde, diacetyl or just some weird yeast flavours). So it’s currently a bit of a beer roulette.

Next to the Spanish beers, everywhere served imported beers, mostly British with BrewDog, Magic Rock, Buxton, Moor, Siren, and others.

And if you do visit then watch out for opening times: lots of places don’t open until 6pm and many are closed on Sundays.

Barcelona is a great place. You might not necessarily go there on a beer holiday, but if you’re there then you’ll be able to drink some great beers, as long as you don’t mind a few duds in between. 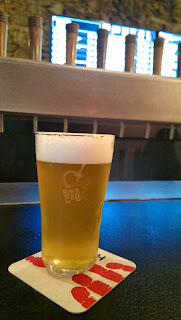