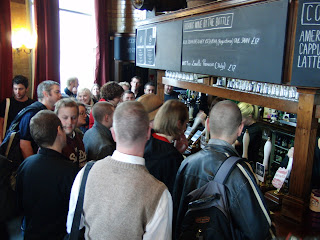 My memory of Saturday (the third Twissup - a meeting of beer bloggers and tweeters - following Sheffield and Burton) is patchy at best. I clearly remember the sleepy beginning in Manchester Piccadilly Station and the spicy end in the curry house but the bits in between are like an assorted mega-mix of hops, colour and laughter. That probably means it was a good day out… 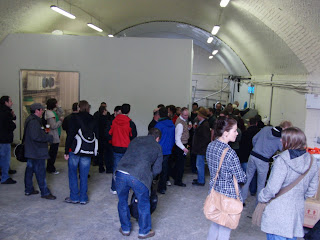 First up was Marble brewery where we had a tour around the small unit (it’s amazing what these brewers can make in their varies spaces – the Marble lot is nothing more than an open room with silver kit at the back and a store room in the middle) and a glass of Dobber so fresh I thought it might start sprouting hop shots. From here we walked up the hill from the brewery to the Marble Arch, a wonderfully handsome corner pub. It’s smaller than I expected, charming, interestingly tiled, with chairs and tables neatly tucked in and a bar fully stocked with casks and good bottles. In here we drank lots of Marble beer, looked at our twadges, Avery got his del Borgo out and Cooking Lager unmasked himself and then ordered a stout (we were hoping he’d come in a real ale drinking outfit of sandals, socks and fake beard but no, he clearly couldn’t be bothered to dress up like the rest of us). For many of us it was the first visit to Marble and the Marble Arch and it was great to finally get there and see where the beer is made and served. The trouble is that it’s impossible not to drink lots of Marble beer when it’s on the bar in front of us, making for a dangerous start to the day. I could’ve stayed for hours, ordered food, working my way along the casks, but we had places to go… 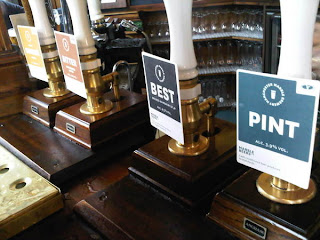 The Angel was next. An unimposing back-street kind of place with a good beer line-up culminating like a sentence with an exclamation mark by having Ola Dubh 30 on the farthest right cask. That was one of the best beers I’ve had on cask this year – mouth-filling, rich, chocolatey and spiked with the familiar saline edge of Highland Park whisky – and a real surprise to find it. From the Angel we went to Bar Fringe, a cool place which had a beer called Twitter or Busted on cask (they couldn’t have chosen a better beer – and it was tasty too). It’s around here that the memory disintegrates into a series of disconnected jump cuts.
Next we’re outside, way behind the others, lost in the wilds of . Then we’re at the station ordering Burger King. Then we’re on a train and Yan is opening random bottles from a magical bag of beers which seems to be refilling itself. Then we pass Stalybridge where the group who were ahead of us were drinking – some get on the train; some don’t. We drink another bottle. We drink in the Kings Head with the most sparkled beers I’ve tasted – I needed Tandleman there to start my pint off for me and battle through the foam – but all of it in great condition and a perfect station stop. Then there’s an underpass somewhere (not sure why I remember this bit). Then there’s The Grove, one of the best pubs I’ve been to for beer selection. Some spicy beef jerky came, which tastes like hot stale carpet, and prompted Fletch to ask for half a pint of milk to fight the fire in his mouth (the reply is unprintable but along the lines of: you flipping tart, grow some). There were a few glasses of Jever, brisk and hoppy; a Gadds’ Green Hop bursting with flavour; a Moravka unfiltered, all buttery and smooth; lots of others which I’ve completely forgotten; and some bottles at the bar opened by Kelly. Some people eat earlier, ‘needing to sober up a bit’, then some eat later – it was one of the best curries I’ve tasted, laid out on shallow trays, served with roti bread and mango lassi (no beer!). As we leave we check the train times and realise that the planned final pint has to be abandoned as the last train home is in 15 minutes. We run to the station. The next thing I remember is a horrible hill in some Leeds suburb and then a slice of Norwegian caramel cheese which was horrific. I sleep like a baby. 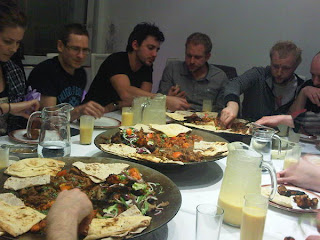 It was a crazy day that passed in a blur (quite literally) with lots of good beers, lots of good fun and a great chance to catch up with lots of different people. Two towns was ambitious but we managed it – no one said Twissups would be easy. The Marble Arch and The Grove were the headline acts of the trip and they didn’t let us down – they are two of the best pubs I’ve drunk in this year and worthy alone of a trip to Manchester or Huddersfield.
My mind is already planning the next one… I’m thinking we choose a southern town and a northern one and battle it out in a vote. I’d love to do Brighton with a visit to Dark Star and Harvey’s (we’ll hire a bus!) and then some pubs in town, finishing at The Evening Star, so that’s the southern option. As for the north… how about Derby? We’ll sort out the options and speak to some breweries and then throw it to a vote. Just pencil in the date now: Saturday 5th February.
Posted by Mark Dredge