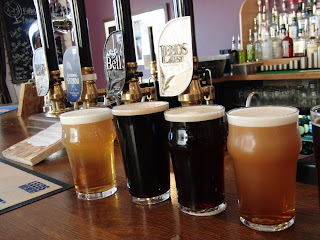 Cask ale is important to each of us in very different ways. In this collaborative blogging effort me, Mark (homebrewer), Shea (young female drinker), Glyn (bar manager) and Kelly (brewer) say why it's important to us.


For me it’s the moment when I walk into a good pub and I see a line-up of pump clips; there’s a sense of the unknown, an excitement to see what’s on. Unlike the ubiquitous keg font, these hand pumps represent something different, something hand crafted in small-scale quantity, something which needs to be treated just right so that it’s in perfect condition for drinking. Standing in front of the tall dark hand pulls I point and say a pint of that please. The barman grabs a glass and with four expert drags the pint is full, a gleaming pale gold with a thick white crown to top it off. Raising it to my lips I smell the hops and a background of malt, but it’s the first mouthful which wins it; cool on the tongue, a very gentle carbonation, so gentle you don’t notice it but enough that if it wasn’t there you’d know; it’s got sweetness, fruitiness and then a dry finish which leaves you craving another gulp.
From the moment I had my first pint of well-kept cask ale I knew that things had changed forever and never would a pint of mass-produced lager taste the same again. I remember where it was, what it was and who I was with. It was different – cool, not cold. It was lightly carbonated and not fizzy. It was easy to drink and interesting with each mouthful. It was brewed just a few miles away. It was dark and delicious. It had flavour and there was an aftertaste that was new to me (I later realised that that was the hops). I learnt the breweries I liked and could trust, I learnt what my favourite styles were, what my favourite ingredients were. Over time it all changed. My tastes went from dark to light, from sweet to bitter. I got interested in beers from further away than Britain, I tried the weird and the wonderful, strong or bitter or ones aged in old whisky barrels. I started thinking about what foods I’d like to eat with the beer in my hand. The richness of this dinner would work well with something light and hoppy; the spice in this needs the firefighting cool of a good lager; the cherry in this beer would be amazing with dark chocolate; this pint of bitter needs a pie on the side.
And then one day I realised that the romance had turned into something greater. I wanted to try different beers and had butterflies when I went somewhere that sold things I’d never seen before. It’s something I can still feel, an excitement, a heart-pounding thrill. I went different places and tried different things, I discovered the wild beers of Belgium, the extreme beers of America and the smooth and delicious lagers of the Czech Republic, the best session beers of Britain – the best beers which I can drink all the time. I drank it all because it was all so interesting and different and exciting. And I was writing about it too. I wanted to be a writer and I chose what I was most interested in: food and beer. I wanted to write about the sensations of the senses; to put words to what I was experiencing.
Cask ale is British and it’s brilliant. I might like all beers but I keep coming back to British cask ale as it keeps getting better and more exciting - some of the best beers in the world are brewed here. Whether it’s a pint of hand-pulled session bitter, a well-crafted British lager on keg or a bottle of something special dreamed up in the imagination of a creative brewer, beer is exciting and different, it’s got provenance and craft, it’s got flavour and quality and there’s something out there for everyone. Cask ale rocks and it’s turning the heads and hearts of young and old - its reputation is rapidly changing and I’m proud to be supporting it from the front line.
Posted by Mark Dredge