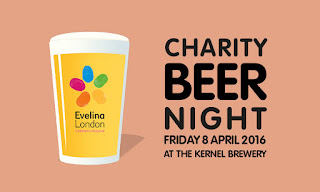 The kegs have been emptied, the cash has been counted and the Charity Beer Night raised £3,700 for Evelina Children’s Hospital!

Thanks so much to everyone who came along, thanks to all the breweries who supported the night with beer, thanks to Grill My Cheese for their delicious food and thanks to The Kernel for allowing the event to happen in their brewery. I had a brilliant night and I’m delighted with the money raised – I’m also delighted with the atmosphere on the night and it was one of the most fun beer events I’ve been involved in. It was also great to be behind the bar and pour some beers and be able to talk to people. It was great.

Extra thanks need to go to The Alchemist. I emailed the brewery with the crazy request that they might donate a couple of cases of their wonderful beer to the night. I didn’t expect them to say yes but if you don’t ask, you don’t get. Gloriously they did say yes and they sent beer to London. I was going to pay for the shipping of the beer but the brewery requested that instead of giving the money back to them, I donated it to the cause, which is extra generous. About £500 of the total is thanks to them and their beer.

Now I just need to run the London marathon. There’s just over a week to go and I can’t wait!