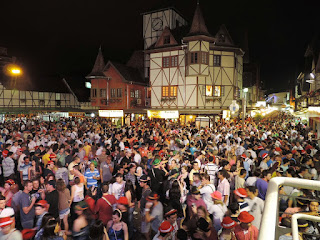 It was at the exact moment that thousands of people dressed in lederhosen and dirndl started singing a German drinking song in thick Portuguese accents that I had to step back and really think about what was going on.

There I was, in the sultry south of Brazil, somewhere in the middle of a series of trips which took me to five continents in two months all in the search for delicious beer, and I couldn’t believe what I was seeing.

It wasn’t just the German outfits, it wasn’t the oom-pah music with the samba beat, it wasn’t even that everyone was drinking German-style lagers from large tankards while surrounded by dense, dark subtropical forest. What really struck me was how this town was built to look like a postcard illustration of a Bavarian fairytale.

The town is called Blumenau and is named after Dr Hermann Blumenau, a well-connected German chemist who founded it in 1850, bringing with him a small group of immigrants from his homeland. The town gradually grew over the decades as more Germans arrived, joined by increasing numbers of Brazilians. 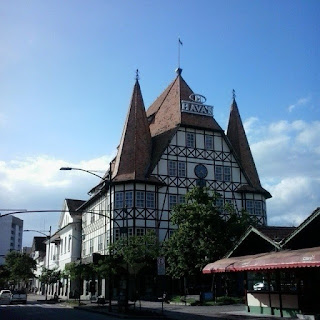 A century later, in an attempt to draw in tourists, the town decided to market its Germanness and play up to its past, eventually leading to 1984 and an ostensible Oktoberfest, which has since become an annual thing. Alongside the party they built a replica German village, complete with a small castle which is modelled on Michelstadt town hall, and lined their streets with shops selling typical German clothes, food and beer glasses, all while encouraging the citizens to embrace their German heritage.

Today the people of Blumenau call their Oktoberfest ‘The Party.’ The whole town builds up to it, the whole town gets excited about it, they dress up for it and they drink steins of German-style beer when there. If they didn’t do it annually, and they didn’t take it so seriously, you’d almost think it was the most elaborate parody you’d ever seen ­– a trick for the tourists. But it isn’t. And it’s a big deal: it’s literally put the town on the map and draws in hundreds of thousands of visitors every year. 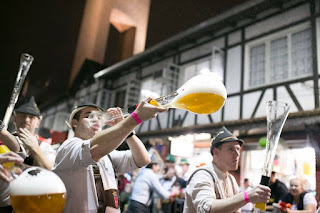 What I find fascinating as I stand in the sweaty heat is that this event isn’t about the beer yet the beer is so integral to it (and it’s good, too, with a bunch of local microbreweries pouring their take on classic German styles, plus a few pale ales). Those swaying steins are shared in the same way as the jokes and the laughs and that’s what makes this event – and beer in general – so good. It brings people together, it brings smiles to faces, and it can make a small Brazilian town famous for its Bavarian buildings and fun beer festival.

I was there searching for the best beer in the world and while the ones I drank there might not have been the best-tasting, the experience was unbeatable. And that’s what really matters – it’s the main lesson I learnt on my global beer drinking adventure – because sharing drinks and good times with people is the reason beer is the greatest drink in the world. 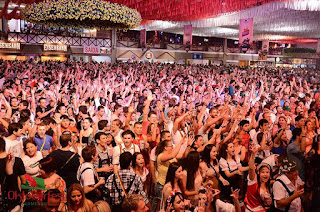 This is adapted from a blogpost I wrote for Foyles last year and I thought I’d share it here. In TheBest Beer in the World I tell the full story of Blumenau – how the town was founded, how it grew, how Dr Blumenau struggled but ultimately succeeded, how he built a brewery in his garden, and then how the Oktoberfest grew and what it’s like today. It was one of the most remarkable trips I’ve been on and one of my favourite stories in the book. Most of the images are from the official Oktoberfest Facebook page.