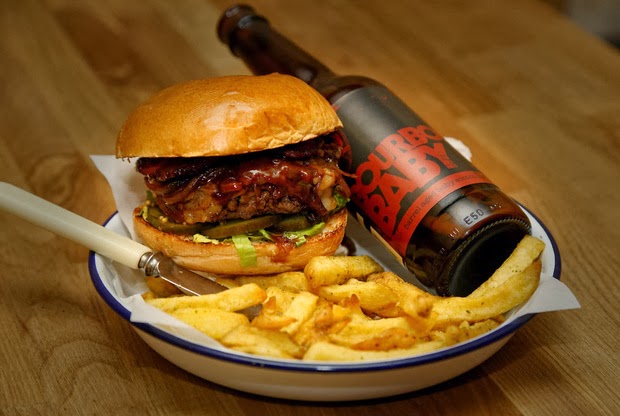 The bastards beat me to it.

I had this plan, you see, to try and make the most beery burger the world had ever seen. A cheeky little tie-in to plug my new book – Beer and Food, coming soon! Pre-order it now! – that would challenge me to use as much beer as possible and still get a delicious burger.

And then BrewDog and Honest Burger did it with the BrewBurger. Something so boozy you need an ID to order it.

Despite my DIPA-level of bitterness, I still wanted to eat it. I had to eat it, in fact. I couldn’t not eat it. I mean, look at it. It’s a magnificent masterpiece of meat. And I say this as someone who spends most of my internet browsing (the non-incognito hours anyway) looking at photos of burgers.

The burger stacks 5am Saint candied bacon, Punk IPA onions and a Paradox BBQ sauce along with comte cheese and Honest’s brilliant beef patty. And it’s excellent. The use of beer is subtle, adding depth of flavour instead of just being a gimmick. The meat is always good at Honest and the bun is so soft and sweet. It comes with a Bourbon Baby, BrewDog’s barrel-aged scotch ale which tastes a bit like JD and coke, in a good way – sweet vanilla, molasses, wood, spice.

Having had the BrewBurger, I’m still inspired to make the ultimate beer-infused version because I reckon I can a lot more beer into a burger and still make it taste awesome. For example, in my cupboard at home right now I have hot sauce made with IPA, I’ve got Black IPA ketchup, rauchbier BBQ sauce and three types of beer mustard. I’ve made mayonnaise with beer. A beer-battered onion ring, perhaps. Beer cheese. Beer onions is a gimme. Beer chilli, jalapenos or pickles. Beer in the bread dough. Some hop salt on the fries. Some crushed malt instead of sesame seeds. Anyway...

If you like burgers and beers then try the BrewBurger while you can. In the meantime, I’m going to have to come up with a better idea for this book launch… Beer pizza, perhaps? The beer bakery?
Posted by Mark Dredge